A Bag and A Blogiversary

Having the flu put a crimp in my blog plans!  But it's Day 8 now and I'm pretty sure I'm going to live after all.  So here we go.

I missed my blogiversary because of that darn flu.  It was on Wednesday and it's been 12 years! Hard to believe that I haven't run out of things to say yet!  Thanks for hanging in there with me! 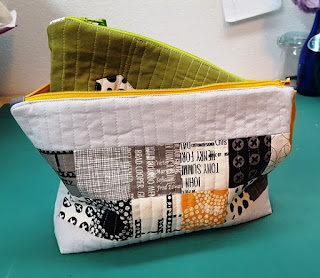 My secret pal finally received her Christmas gift from me, so now I can share it with you!  This was through the Tacoma Modern Quilt Guild.  We have a gift exchange at least once a year and I try to participate when I can.  It's so fun! 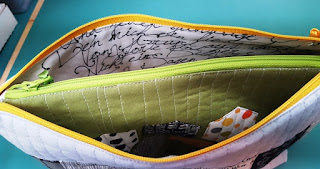 I started these two bags while at my sister's house in December.  I got an emergency call from her for help, as she had slipped and fallen on her porch and broken her leg!  She lives about 3 hours away, so the first emergency was over.  But she was having trouble dealing with it all - she lives in a split level house.  So while I spent a week there helping her, I got these bags started.  I didn't use a particular pattern for them, just kind of a mash-up of two or three.  Then got them finished at home in time for guild meeting.  My sister is all healed up now and doing well.

Secret Pal is a German lady, so I put the Zen Chic fabric that has German writing inside both bags.  I used the black-on-white version in the first bag.

And I used the white-on-white inside the other bag.  It's harder to see.

I used hexies on the outside of the second bag.  I used more of the Zen Chic mini charms for them and I used the tutorial by Modern Handcraft.  They were fun to do, and pretty easy.  The hardest part was getting them to stay in place on the bag while I stitched them down.  I started by just quilting over them but that wasn't going super well.  So I went back and stitched around the edges on all of the hexies.  I'm happy with the way they came out! 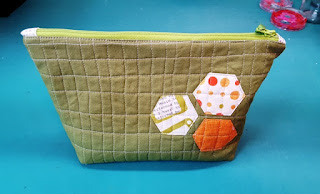 I even put more hexies on the back of the second bag!  And I included lots of dark chocolate for her to enjoy!

So, Secret Pal was very happy with her gift, which makes me very happy!

We've been having So. Much. Rain. this past week!  There are flooded rivers and places all over.  Not to mention landslides.  Everything is totally saturated.  And everyone is hoping the rain lets up soon.  It just hasn't given us a break!  It's been so dark and grey and depressing, and the rain has been coming down so hard.  I was perfectly happy to not set foot out of the house at all for the past week.  We finally got a few hours of a break this afternoon and now it's supposed to be dry for a few days.  No sun particularly, but at least not End Of The World amounts of rain.  I sure hope we can dry out some now!

I hope to feel well enough to start sewing soon too!