Projects and a New Puppy


I tried something new last week - Artist Trading Cards!  The local art gallery put out a call for ATC's, which they will be using as a silent auction fundraiser.  DH (aka The Potter) didn't find out about this in time to do pottery ATC's, so he did his in paper art.  I thought I'd do some fabric ones, natch!


I flailed around for about 3 hours, trying various things, but nothing was working for me.  I had in mind to use my hand-dyed fabrics.  I finally gave up trying to be "artsy" and fell back on free-piecing.  Fortunately, I had a little bucket full of tiny scraps of the hand-dyes (I can't bear to throw away anything big enough to use!).  So #1 was easy.  #2 is made from scraps of scraps of scraps!  I had a bag full of batik scraps that I actually bought, and made a little bag from them.  This ATC uses the parts I trimmed off of that.


I'm so glad I took the design class from Gwen Marston recently, because that was a huge help in making these.

Tonight we get to go to the Preview Party.  It will be fun to see all the ATC's.  I understand there are something like 70+ ATC's made by over 18 artists.  Whoo hoo! 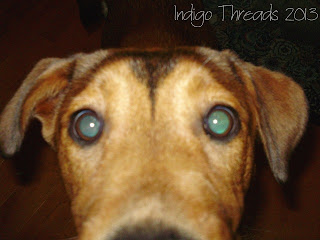 Meet Bailey, my newest Grand-dog. She is a 6 month old puppy, a mixed breed that includes Lab and German Shepard.   She is faster than my camera! 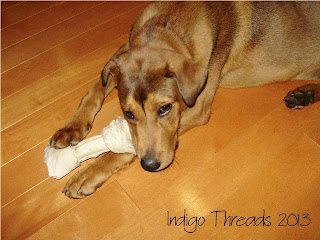 Here she is in a more quiet moment.  She seems to be a good dog, and everyone is having a good time with her. 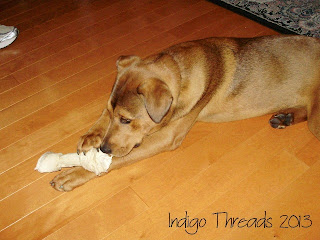 Son #1 says that training his daughters is harder than training Bailey!

I finished my Color Challenge quilt in time for the Big Reveal at the summer picnic.  I didn't win any prizes, but I think I would have won for Smallest Quilt!  I kept it simple and just quilted a random plaid.  Random is hard! 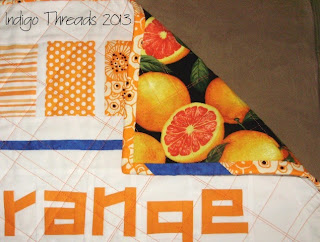 Here's a peek at the back.  I used "orange" fabric, of course!

I'm having trouble with focusing on anything right now.  Just kind of pfutzing around, looking at this and that, trying to decide what to work on next.  I'm enjoying the summer.  We have had beautiful weather, so far.  So, I'm happy!

Wishing you a happy, creative week!
Posted by Sharon at 12:09 PM 7 comments:

I've been working on another Small Study since my class with Gwen Marston, and it's finally done!

I started with that central square of fabric, which was a 6 inch square, and picked all my colors from that.  I was trying to only use that 6 inch square, but ended up finding the rest of the fabric and using a little more.  This one was difficult to do, as I was trying to not repeat my previous efforts too much.  I think I did OK.  It was nearly over-done before I finished, but I kept simplifying and it finally jelled for me.  I was missing Gwen's input!

Here's an F.Y.I. - Gwen will be teaching in this area again next tyear.  She's teaching a number of classes (multiple days) at Quilted Strait quilt shop in Port Gamble in April 2014.   Candy and I are already signed up! 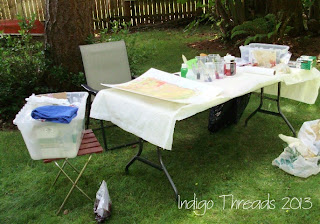 We, along with the whole West of the U.S., have been experiencing quite a heat wave the last few days.  Since it's been so nice, I decided it was time to dye/paint/sun print some fabric again!  So, that's what Candy and I did this morning.  The day started out cool and cloudy, but eventually the sun came out.  I don't think the sun printing was too successful, though.  But it was a beautiful day - not too hot and a nice breeze.  It was really pleasant out in the yard.  Ahhh . . . summer!  (Finally! as my DH would say!  He's been anxious for the rain and cool weather to stop and for summer to get here.) 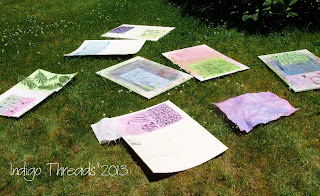 Here is part of what we did, drying in the sun.  The sun moves very quickly here this time of year so I spent quite a bit of time moving my dyeing boards around to try and keep them in the sun.  I think that's why the sun printing didn't work too well.

Many of these fabrics were re-dyeing or over-dyeing some less-than-successful pieces from some years ago.    When Susan Purney Mark spoke to my quilt guild a few years ago, she told us not to be hesitant about re-doing pieces.  She said sometimes they're just not done yet!  So, what the heck, I thought I'd give it a try.  I sure wasn't using them like they were, and I probably couldn't make them much worse.  Nothing ventured, nothing gained, right?  Well, I haven't even ironed my pieces yet, but I *think* I improved at least some of them!  I'll know more tomorrow, after I iron them and really look at them in good light.

I hope all of my friends in the U.S.A. have a stellar 4th of July!  Happy Independence Day!
Posted by Sharon at 8:41 PM 10 comments:

Labels: dyeing, Gwen Marston, Small Studies
Newer Posts Older Posts Home
Subscribe to: Posts (Atom)
For all of us, the key is to pay close attention to which activities make us feel most alive and in love with life - and then try to spend as much time as possible engaged in those activities.