Oh my stars! It's another flimsy finish!

I've been sewing my little fingers to the bone, trying to finish quilts for the quilt show.  And I have another finish to share with you!  Remember these? 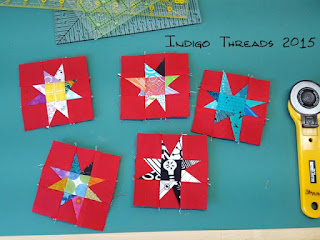 Here is where they live now:

Presenting "My Lucky Stars"!  The little sneak peek stars are the cornerstones in the sashing on another Block Lotto win.  (The colors in this photo aren't true to life.  That is red in the quilt, not the hot pink that's it looks like on my computer screen.)  These are the Tall Stars that I won back in August 2013.

Here is where I started, with my initial layout of 48 blocks.  The block was an adaptation of Bonnie Hunter's Maverick Stars, except that it was made in a rectangular size, using red for the background.  You could do a scrappy background, with one fabric for the star, or one fabric for the background with a scrappy star.  These were so fun to make!  If you want to try one, here is a link to the info on Block Lotto.  I got the idea of putting the stars together like this from Joe Tulips.  Thanks, Julie!

I decided on a dark to light layout, but I'm not sure you can tell from the photos.  It runs diagonally across the quilt, with the darkest block in the bottom left corner and the lightest block in the top right corner in the photo at the top of the post. I tried to find a red solid that worked with all of the scrappy reds in the blocks.  I was kind of surprised when I compared the darkest block to the lightest block.  That red center square, which is the red solid I found, looks like 2 different colors in these two blocks!  Isn't that interesting? 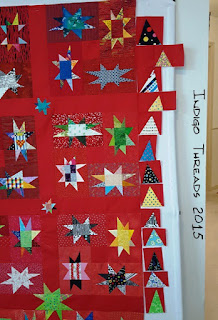 After I got the center assembled, The Potter suggested I add some triangles that echo the star legs in the blocks into the border.  I thought that sounded good, so I proceeded to make a bunch of them.  I really wasn't quite sure what I was doing when I started.  I seem to flail about for a while before I figure out what I'm doing, but I eventually got into the swing of it.  The only downside was the absolute mess I made in the quilt studio.  I have red scraps and bits of fabric everywhere!  I ended up using all of that red solid except for one strip about 6 inches (the width of the border) by 12 inches.  Whew!  That was close!

Here is one of those little cornerstones from the sneak peek. 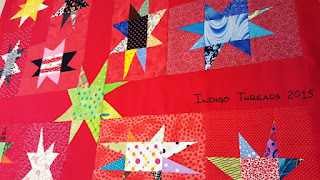 In one cornerstone, I decided to do something different, and made one big wonky star. 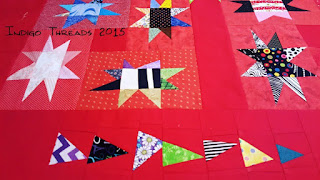 Some of those crazy triangles in the border. 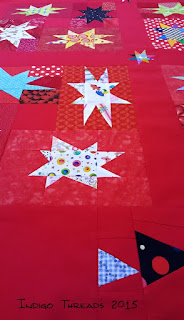 Anybody recognize the blocks you made? 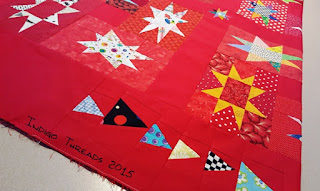 This quilt has gone to the quilter now, and I'm so excited to see this one done.

The next quilt is on the design wall.  I've gotten my Traveling Round Robin blocks back, and that quilt is on it's way to being completed.  I hoping to get to flimsy stage over the weekend. 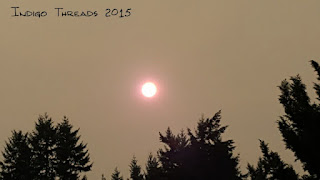 As most of you know, Washington is having a horrible, record-setting fire season this year.  Most of the fires are in Eastern Wash. and I live in Western Wash.  This was what the sunrise looked like last Sunday morning.  That is a smoky sky!  It stayed that way all day.  It smelled strongly of smoke, and we had ash falling on the cars.  I can only imagine, if it was that bad here, how bad was it where there are the fires?  My heart goes out to all that are affected by the fires, and I applaud all the firefighters doing so much to stop those fires.  We're all praying for some rain.  It looks like our prayers may be answered this weekend.  I just hope some of the rain makes it over the Cascades to the eastern part of the state.
Posted by Sharon at 12:37 PM 12 comments:

Sorry I've been so quiet around here lately.  I have been busy though.  I've had a busy summer, and I've been madly sewing to have a quilt or three to hang in the quilt show in October.

These were the 'Big O' blocks I won from Block Lotto in December of last year (2014).  We were supposed to use black or another very dark color for the background and the bright fabrics were quilter's choice - whatever we wanted.  These blocks were a lot of fun to make, and very easy. 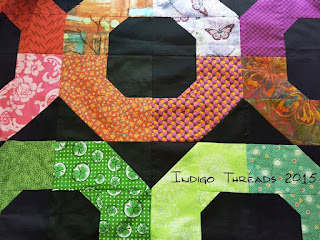 The pattern is actually one quarter of a circle, and you need 4 blocks to make a complete circle, which finishes at 14 inches.  So making the quilt goes pretty quickly! 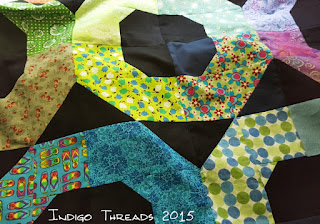 I made a few more blocks to complete the rainbow color scheme I was doing, and the unused blocks will be on the back. 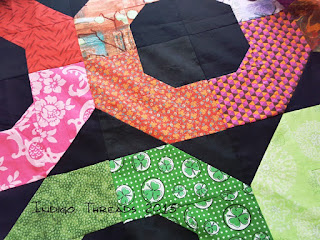 I dug into my scrap bins for all the blocks that I made.  I didn't even make a dent! 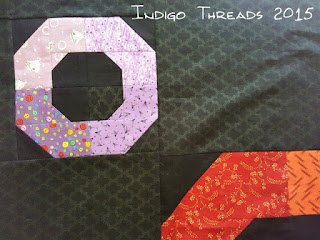 I decided that I needed to make some smaller O's to go in the corners, so I drafted the block out.  The quarter squares finish at 3 1/2 inches and the complete circle measures 7 inches.  And even though they were small, they were still easy to make. 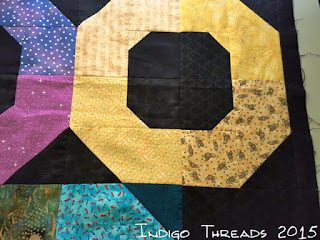 I made some more blocks to finish the ends of the middle row.  If you enlarge the photo, you can see the black on black print I used for the border.  I found that at Fabric Depot in Portland, Oregon.

The top is currently at my long-armer Shari's, waiting to get quilted.  I can't wait to see how she quilts this.  I left it up to her, and I know she'll do a great job.

Now I'm working on another Block Lotto win.  Ready to add the borders this week.  Here's a sneak peek:

Labels: cats, patchwork, quilt flimsy
Newer Posts Older Posts Home
Subscribe to: Posts (Atom)
For all of us, the key is to pay close attention to which activities make us feel most alive and in love with life - and then try to spend as much time as possible engaged in those activities.