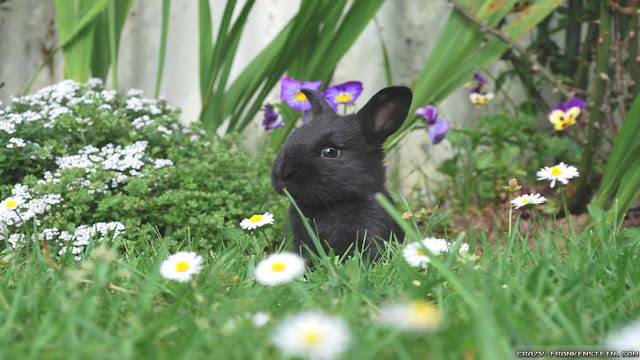 I've been having fun playing the last couple of days, and I thought you might want to see my "art-fartsy" stuff.


First, I finally finished my little leaf wall quilt!  You can see how this little quilt started on this post.  It actually came out a little bigger than I was aiming for, but it still fits in the space it's intended for, so it's all good.  I took this photo without flash, as it seemed to better show the dimensionality of the leaves (made from used and dyed dryer sheets) than with the flash.  The colors are pretty true-to-life on my screen.

Yesterday my friend Candy came over to help me play with some of the goodies that I bought at Sew Expo this year and last.  My favorite booth at Sew Expo seems to be Embellishment Village.  I think they have the best toys!  Candy watches me buy stuff there and I'm sure she wonders what the heck I'm doing with it.  Frankly, I hadn't really done much with it yet and it was time to remedy that!

So, we had fun playing with foiling and Paintstick rubbing. Here's the results of our play: 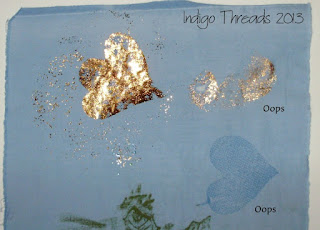 This is Candy's first attempt at foiling and we both learned some things!  The top right taught us to not apply the iron to a previously foiled area.  It removes the foiling!  The bottom right area showed us what happens when you put the foil stuff wrong-side down to the adhesive.  The upper left area came out pretty good.  There isn't complete coverage if you use Wonder Under, which I actually kind of like.  The little speckles are done with 007 Bonding Agent, which is a fusible that is granular, kind of like salt.  I LOVE what this does! 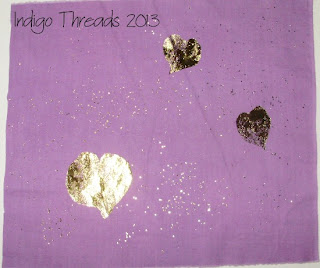 This is my first attempt at the fusible.  I also used Wonder Under.  Free-hand cut hearts, so they're wonky.  And more sparkly sprinkles!  You can see I was so anxious to get started that I didn't iron my fabric.  We used all hand-dyed fabric from my stash. 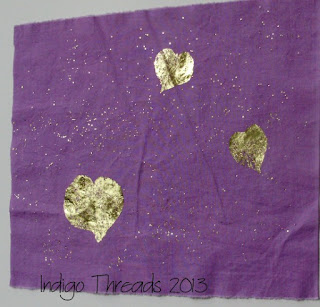 Here's a second shot of my piece.  (more wrinkles)  This foiling is so hard to photograph! 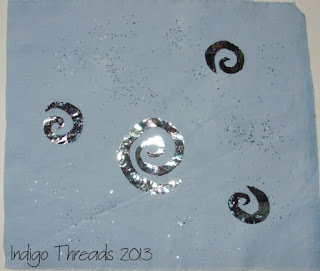 Here is a piece I did this morning.  I wanted to try the swirly print foil and use Heat 'n Bond.  I have 5 packages of Ultra Hold and 5 packages of Lite, but no "regular".  So this is the Ultra Hold.  I was afraid the Lite wouldn't stick well enough.  And more sprinkles!  I think I could put these sparkly sprinkles on everything and still love it! 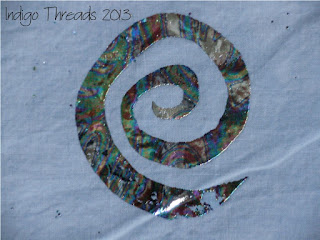 Here's a closeup of the big spiral.  You can see the swirly print of the foil in this shot.

After the foiling, we tried doing some rubbings with oil paint sticks. 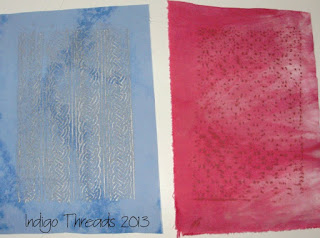 The fabric on the left has iridescent silver, the one on the right has opaque rose.  I used some texture plates intended for Fimo clay for these.  The pink one didn't work too well because that particular plate had multiple layers of texture, but the paint stick only got the highest layer.  But I think this will work well for a background piece. 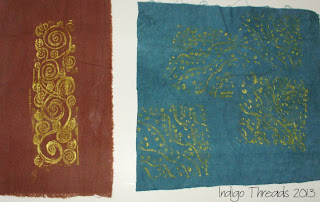 Both of these have the iridescent gold paint stick.  I rubbed over rubber stamps on these pieces.  The design on the left kind of smeared because I rubbed the paint stick a little too vigorously. 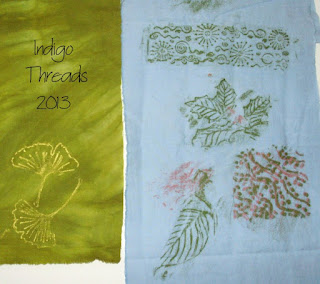 The left fabric has iridescent gold, the right is Candy's and has opaque green and rose paint sticks.  We used some rubbing plates and rubber stamps for these. 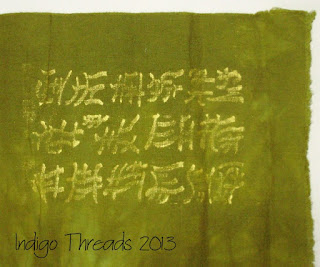 Gold paint stick.  This is Fantasy Kanji, a rubber stamp I purchased at Embellishment Village (and this photo is actually sideways). Fantasy in this case means that it doesn't actually say anything, it just looks like Kanji (Chinese characters used in Japanese writing) I think this one came out the best, and I have a plan for this one.

I used the video Surface Design Sampler Platter with Lyric Kinard as my source of information and inspiration..  It's available here as a digital download.  I recommend it!

I've been working on a little of this and a little of that for the last week or so.  My Quilter's ADD was running rampant for a while there, and I couldn't focus on anything.  So I did just a little clean-up in the studio (found the top of my desk!!) and it seemed to help tame that ADD beast.  There's still a lot of clean-up/straightening up to be done, but after that exhausting experience I just wanted to sew.  And now the cat doesn't have to surf across the desk to sit by me.  We're both happier! 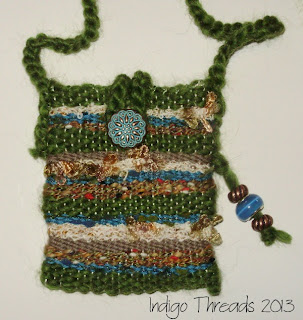 My third Woven Treasure Bag/Cell Phone carrier has been finished and gifted, so I can show it to you now.  This is sized to fit the smaller flip phones, not a smart phone or i-phone. These are not my usual colors to work with, but I enjoyed working with some different colors.  I knew C. would like them.  So this bag is now hers.  I'm working on supposedly making bag #4 for me.  Haven't actually touched it in weeks.  But it is "in process".

I found out about the Country Threads On-Line Sampler Quilt quilt along from Cathy over at Big Lake Quilter blog and decided that I wanted to do it.  I've always loved all the C.T. patterns and books, but haven't really made many of their patterns.  So this is the year!  I'm off to a late start, but still have plenty of time to catch up.  Lots of piecing and no applique - right up my alley! 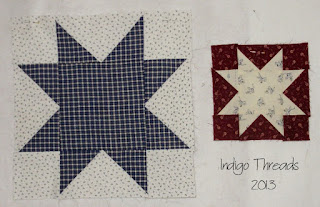 Here are my blocks for January.  The blocks are 12 inches and 6 inches. I've decided to go with a "circa 1900" vibe/color scheme for this sampler.  You can see some circa 1900 quilts here, here, here and here.  I'm thinking lots of blues (both indigo and medium blue), reds, claret, some black and olive green and the occasional cheddar and chrome yellow, with shirtings and lots of plaids and stripes.  A little brighter and more colorful than the Civil War look. 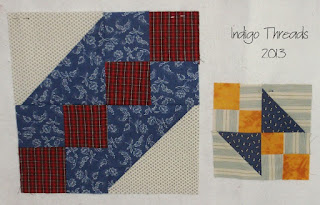 And here are my February blocks.  This was the suggested look for this big block, and I'm not too sure I like it yet.  I'll wait and see before I make up my mind, but this may get changed to the more traditional configuration, like the small block.

I'm starting my March blocks now, and I hope to have them done before the month is over. 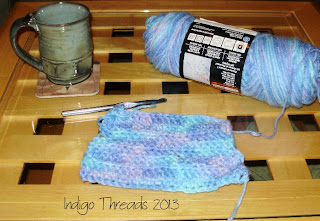 The local art gallery is going to be doing a yarn bombing in their neighborhood and is asking for help.  When I was looking for something in the studio the other day, I ran across some yarn and my crochet hooks.  So, I'm attempting to remember how to crochet!  I used to do it a lot, but then had to give it up because of arthritis in my hands.

My brain is feeling rusty again!  You can see that this is not a perfect example of how to crochet! I can't quite remember what to do at the edges (and it shows!) and I think I was not really doing a double crochet stitch there for a few rows.  But whatever - it doesn't have to fit anyone and it's not for close scrutiny!  I don't think the tree, or whatever it gets put on, is going to care much about my technique!  And I'm also sure I won't be doing much crochet in the future.  It still doesn't feel very good and I can only do one row at a time before I start feeling it.  But it's fun to play with yarn again.

Have you tried something different lately?
Posted by Sharon at 10:49 PM 5 comments:

The Scrappy Trips quilt I was struggling with is finally to flimsy stage.  Yay!  This was harder than it should have been, but I finally got there.  The back is also done, and as soon as I get the binding made, it'll be ready to hand off at the guild meeting this week for someone else to do the quilting (because this is too big for me to do myself). 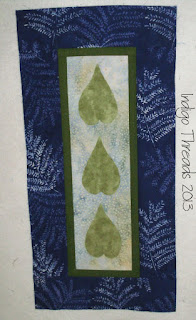 I'm starting a little wall hanging (around 16 inches long) to fit a certain spot in my kitchen/dining area.  I've had the same little quilt up there for years, and it's time for something new.  I collected some Aspen leaves when we were in Nevada a few years ago; I brought them home and scanned them into the computer.  I printed out the scan and used it for my pattern for this.  I fused a hand-dye look fabric down for my "base".

I'll be adding these on top of those fused leaves.  These are hand-dyed dryer sheets that I cut out with the same Aspen leaf pattern.  I've got two layers here, just because it made a much more interesting color than one layer.  I had to fuse on the base in the previous photo because these dryer sheets don't really have enough "oomph" on their own to show up well.  I'll be stitching these down by stitching the veins on them - leaving the edges loose.  I've never done this before, so it's all a big experiment!

I seem to be flitting around the quilt studio, doing a little of this and a little of that.  I can't concentrate on any one thing.  I have 5 more blocks to do for my Low Volume quilt and it'll be ready to put together.  I've started making blocks for the Country Threads Block of the Month Quilt Along.  I got January's blocks done  today - only 2 months behind now!  Plus I'm mentally playing with ideas for my color challenge quilt, trying to decide what I want to do with it.  Quilter's ADD strikes again!  Bear with me, I'll have more to show soon.  At least I hope so!
Posted by Sharon at 7:00 AM 9 comments:

Labels: charity quilts, small quilts
Newer Posts Older Posts Home
Subscribe to: Posts (Atom)
For all of us, the key is to pay close attention to which activities make us feel most alive and in love with life - and then try to spend as much time as possible engaged in those activities.