I'm going to be participating in a couple of projects that my quilt guild is doing this year, so I've had to make some decisions lately.  It's been fun but also kind of painful.  I have a hard time making decisions about quilting projects because I can get all wrapped up in the possibilities and then can't narrow it down.  Silly me.  And the worst of it is that I drive myself crazy when I do this!

The first project we're doing is a Mystery Quilt.  I decided to shop my stash for this one, but I had to look at lots of fabrics.  I needed three yards of background, and two yards each of a focus fabric and an accent fabric.  I don't usually buy big chunks of fabric, so not all of them were big enough for this project.  But, after going through my entire stash, pulling out anything that looked like it might be big enough, I finally found a focus fabric I liked AND had enough of!  I even had enough of the dragonfly print background fabric as well.  Both the wild print and the background fabrics have been in my stash for a few years.  I did have to buy the green fabric, but that wasn't a problem.  *grin*

The second project the guild will be doing this year is a Traveling Round Robin. This is a different Round Robin than is usually done.  How this Round Robin works is this:  I decide which fabrics I want my quilt made from, and put them all into a box or a bin with my name on it.   I then decide which 12 inch block I want to make for everyone's Round Robin quilt. Then I make a block in my chosen pattern, using my fabrics, which I also place in my box.  Then I pass my box/bin to the next person on the list, and I also receive a box from another person.  For each box that I receive, I will make the same block in "my" pattern using the fabrics that are in their box, then put the block I made in their box and pass it to the next person on the list.  I'll always pass and receive from the same two people throughout the Round Robin. (As an example,  I always pass to Julie and receive from Bonnie.)  After the Round Robin is all done, I'll have 15 12-inch blocks for a sampler quilt, all in different patterns but all in my fabrics.  Then I'll decide if I need to make more blocks (I might want 20 blocks), how I want to set them together and then finish the quilt.


I went to my LQS and spent about 2 hours looking at fabrics.  Nothing really captured my attention.  At least, nothing I really wanted a quilt made from.  So then I went to Ben Franklin's and looked around.  The only focus fabric there that I loved, I've already bought!  (you can see the pillowcase I made from this fabric here.  You'll need to scroll down a little ways - it's the pillowcase on the right in the photo, with the orange cuff)  So that's what I went with.  I bought another 2 1/2 yards of the fabric (thinking of a possible border) and bought some companion fabric and a bunch of solids.

The next, hardest decision was which block to make??  I would love to do something free-pieced or improvisational, but I don't think it would be the same sort of style as everyone else will be doing, which, to my mind, is important when you're doing a sampler quilt.  I spent hours (days!) poring over quilt books, trying to decide what block to do.  I used up some older scraps to make sample blocks. 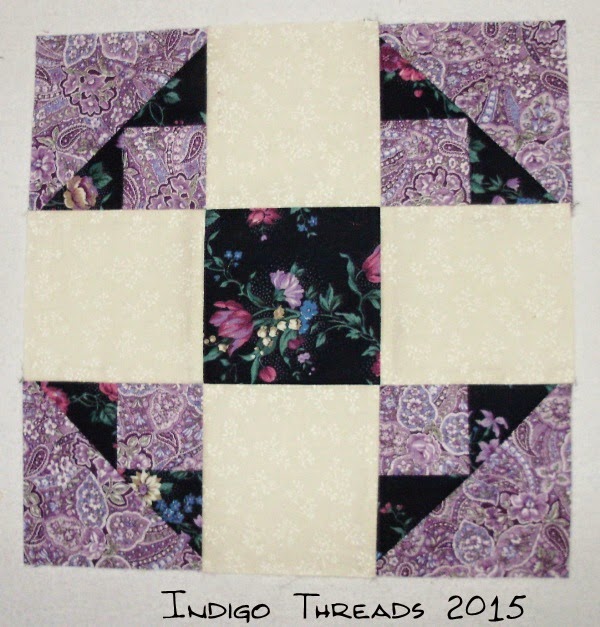 The first block I tried is called "Album" and I found it in Judy Hopkins' 501 Rotary Cut Blocks.  Nice enough, but not really "it". 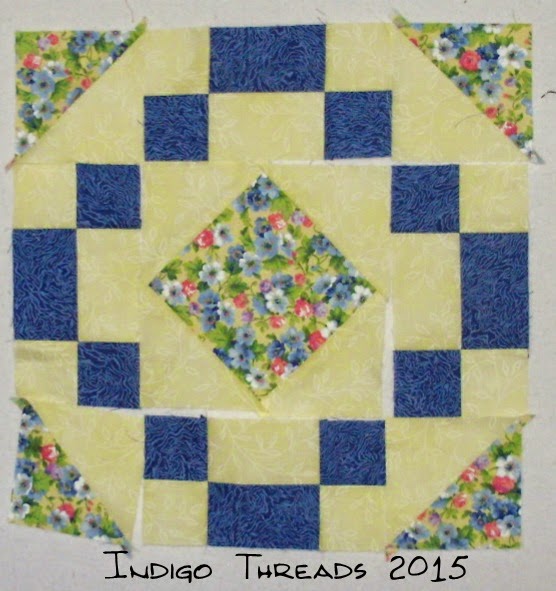 Another block from the same book called "Irish Chain".  I didn't even finish sewing this one together after I decided I really didn't like that yellow fabric - it's thin and flimsy.  I wish I had switched the position of the lights and the darks.  I could just switch the yellow triangles out for the blue, but I don't care enough to spend the time to remake this block.  Again, I like this block but it's still not what I was hoping for.

So, I really thought about what I would be doing with the block, and decided that I needed a block that could use multiple fabrics easily, as well as look complex without being too difficult to do.  We'll be passing our boxes twice a month in order to have the quilts finished in time for the quilt show in October - hopefully.  So, I thought that complex piecing would make it difficult for me to do the blocks in a timely manner.  That ruled out blocks with a lot of triangles.  I knew I just wouldn't be happy making those.  So I changed my parameters for this and looked in some other books.

Here is the block I decided on.  It's a Sister's Choice variation and I found it in Kim Diehl's book Simple Charm.  I can use up to 11 fabrics per block, those triangles are really easy to do, I don't need to worry about cutting off the points of the triangles on the edge of the block, and it has easy cutting and assembly.  This will work for me!

Now all I have to do is make my block with my fabrics and I'm ready to pass it on to Julie.  I already have Bonnie's box and I need to make this block with her fabrics as well.

But first, I have to deal with the disaster that my quilt studio has become. Ugh.  No room to work or even walk, so it has become a priority now.  Hopefully that won't take too many days.

Whoa!  What happened to January??  I can't believe it's been a whole month since I posted!   Oh, and by the way, my last post was my 300th post!

I went to the mini quilt retreat and had a good time.  I even got some things accomplished.  But I came down with a nasty cold with a vicious cough almost the next day.  And, just when I was getting over that, it turned into a sinus infection.  Ugh.  We were going to be leaving for Florida in a few days when the sinus thing happened, so I quickly took myself to Urgent Care and got some antibiotics and cough medicine.  I finally felt better, right before we got on the plane, and I'm sure all the other passengers were as happy as I was that I was no longer infectious or coughing my lungs out!

We had a great time in Florida and really enjoyed the sunshine.  It wasn't real warm, as FL was getting the side effect of cooler temps during the "winter event" happening in the Northeast U.S.  But it was gloriously sunny, and that was wonderful.  We were in Tampa while DH was having a Professional Development conference with the Co. he works for.  There were 5 other wives there, and we had a grand time seeing the sights.  We went to Clearwater and saw the white sand beaches there (that looked just like powdered sugar!), along with lots of pelicans, and I even got to see wild dolphins playing in the ocean!  Then we went to Tarpon Springs and shopped and ate wonderful Greek food.  (I especially recommend the flaming cheese! Fun to see and yummy!)  Oh yeah, and I finally got some Key Lime Pie.  I had never had the real deal before and it lived up to it's reputation.  Sadly, I never found a fabric shop, but that was OK.  I had fun seeing someplace new, and sunshine in the middle of winter was just what the doctor ordered!

But enough blabbing.  Let's get to the good quilty stuff! 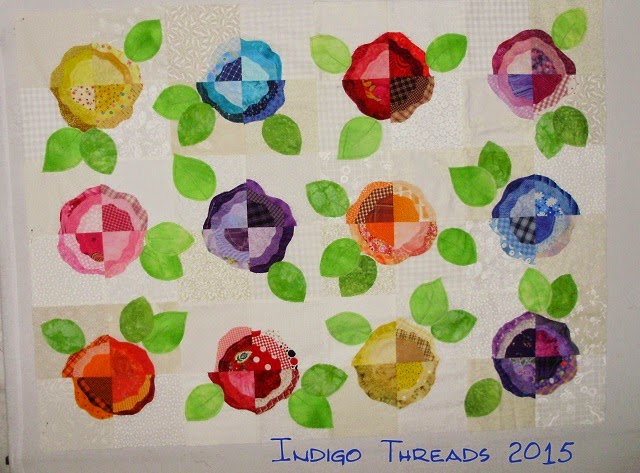 At the mini quilt retreat last month, I managed to make some real progress on my Split Flowers friendship quilt that has been languishing in my project bins for too many years.  I had finally gotten the blocks put together into a top before the retreat and got all the leaves sewn on while I had friends to talk to there.  Now that I've seen the photo, I can see that I need to add just a couple more leaves.

And then it'll be time for the major decision of what to do for the border.  I'm torn between doing some more raw edge applique like the flowers and leaves, probably using a serpentine vine, or doing something pieced.  Any suggestions?  It may come down to what will be faster, as I'd like to have this finished in time for the quilt show in October.

Edited to add: this pattern is from the book Stitch and Split Applique and it's available on Amazon here. 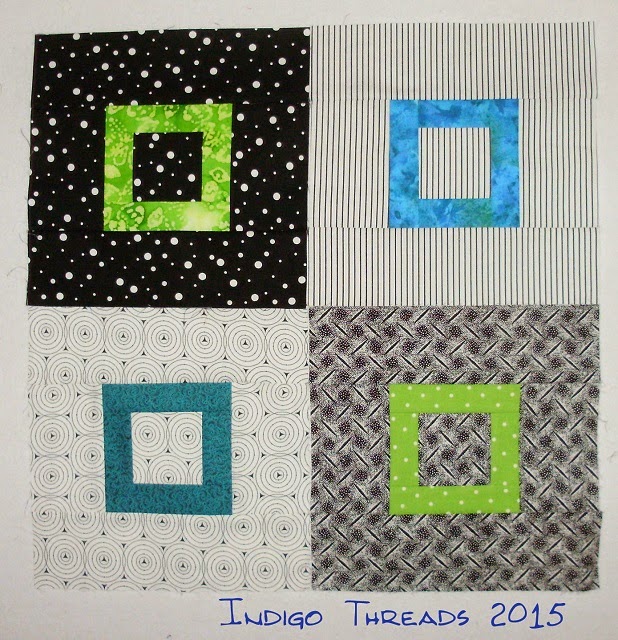 I didn't make great progress on the Split Decision quilt that I showed in my last post here.  But I got a few blocks made. 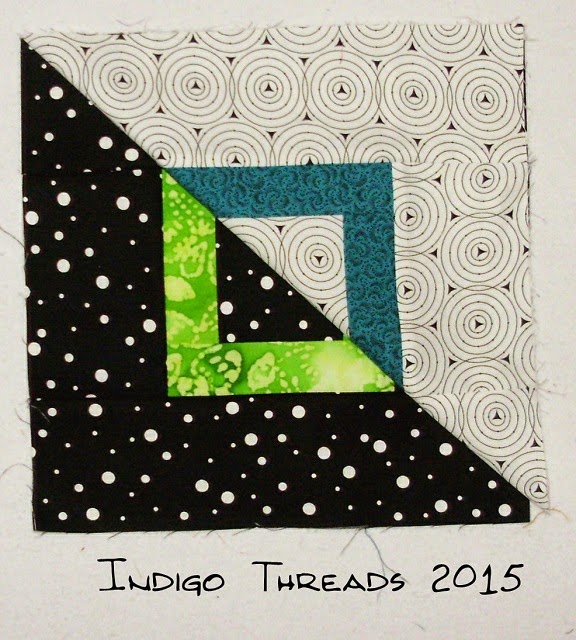 Here is an example of what a finished block will look like.  (one block is just folded in half and placed over the other)  I like this!

And that was the end of any sewing that happened in January.  But I have been sewing this past week.

I made some blocks for my guild's raffle quilt.  This year there's no set block size or color theme.  We're just going with the concept of friendship, stars and baskets. 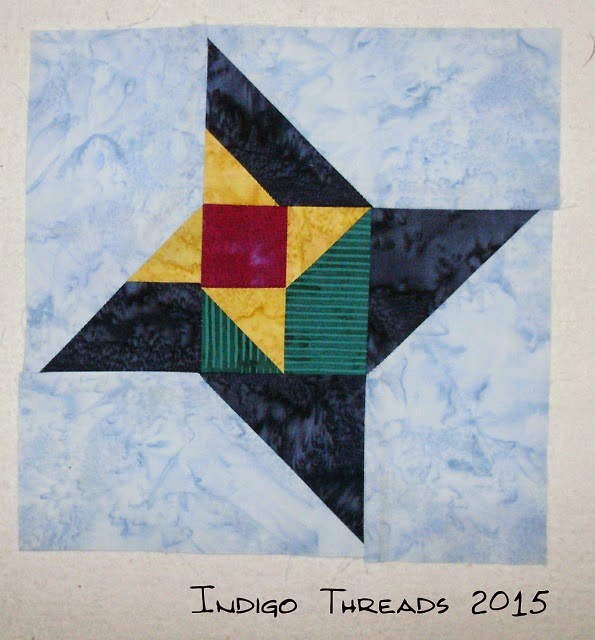 This block finishes at 9 inches and is called "Measure For Measure".  I found the pattern in Judy Martin's book The Block Book.  There are templates you're supposed to use to make these patterns, but I tried to get cute and fake it.  It got ugly.  But I got it done! 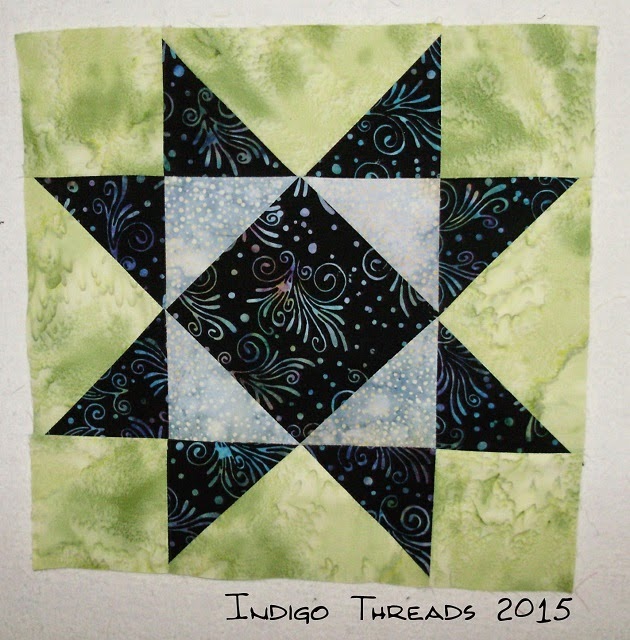 This is my second block for the raffle quilt.  It will finish at 12 inches and is called "Crystal Star".  This pattern came from Judy Hopkins' book 501 Rotary Cut Quilt Blocks.  I love that book!  And this block was easy.  I think it took me longer to decide on the fabric than to construct the block!

That's all for now, folks, but I hope to be back soon.  I've got more quilt-y goings-on to blab about.

Have a creative week!
Posted by Sharon at 9:16 PM 6 comments:

Labels: books, friendship blocks, patchwork, playing with blocks, projects, quilt retreat, travel, vacation
Newer Posts Older Posts Home
Subscribe to: Posts (Atom)
For all of us, the key is to pay close attention to which activities make us feel most alive and in love with life - and then try to spend as much time as possible engaged in those activities.