Today is my 10 year blogiversary!  Yay!
I can't believe that I've had this blog for 10 years!  That's a lot of blogging.  It has been one of the most fun things I've done.  I'm always thinking of what to put on the blog, and I take way more photos than I ever use.  *grin*  I've met so many wonderful people (even a few in Real Life!) and made a lot of friends.  And I've learned so much from my readers and other bloggers that I read.  Blogging literally changed my life - for the better!

Thank you all for being my readers!  Your comments make my day!  I love to read your thoughts on what I'm blogging about.

I know it's been too long (again) since I blogged.  December got away from me due to the holidays.  Then, the first week in January, poor old Shade, my cat, got Obstipation (Obstructive Constipation).  He got to spend the first week of the year at the vet's - I had to drop him off in the morning and then pick him up in the evening. The vet wasn't sure he was going to make it, and all the vet techs were rooting for him.  They fell in love with him because he's a big cuddle bug and he kept purring while they were working on him.   Poor kitty, that was pretty tough on him since he's almost 15 now.  But he came through it and is thriving now.  He's got prescription foods, and I have to make sure he gets enough liquids and hopefully this won't happen again.  *fingers crossed*

Then on Wednesday that same week we found out our son would be having surgery on Thursday.  Son got through the surgery fine, but that evening we had to take him to the ER.  (We left home at 11 pm and were there in the hospital until 4 am.  I'm not as young as I used to be, and it took me quite awhile to recover from that all-nighter!)  Son was in a lot of pain.  The ER folks were wonderful and he got lots of different tests.  They decided he needed to be admitted and he was there until Saturday.  Son is having a long, difficult recovery and still has 2 more weeks before he can pick up more than 10 pounds.  He's sleeping a lot.  I hope he gets better soon.

Two weeks ago we took a trip to New Orleans, something for DH's work.  He had to work, but I got to have fun.  Some of the wives get together and do stuff. We took a tour of 2 of the sugar cane plantations along the Mississippi River.

I was really impressed with the immense Live Oak trees - note the person on the left of the photo, to give you a sense of how big these trees are!

The tours included lots of history, which always fascinates me.  I learned quite a bit!

DH and I managed to find time to go on a carriage ride around the French Quarter, which actually is the original city of New Orleans.  Here's "our" mule that pulled the carriage (with 7 people in it, no less!).

She's all decked out for Mardi Gras, which actually lasts 2 weeks in New Orleans! 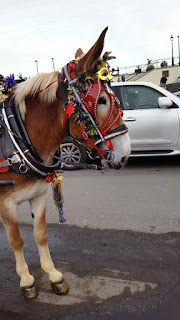 Here's her sweet face.  And check out her glittery hooves!  She was a sweetie - she really liked getting her pets and scritches! 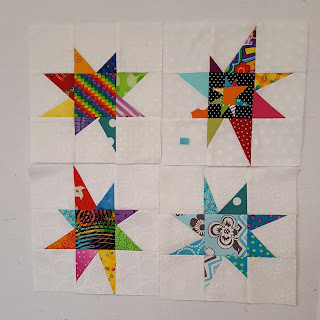 I joined two Instagram sew-alongs in January.  The first one is the #wonkystar2018 swap run by @bylancer.  I was in a group of 14 swappers, so I got to make 13 star blocks. Here are my first 4.  My favorite one is in the upper right. 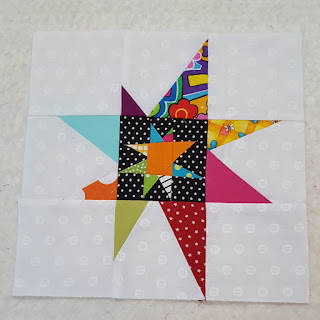 Here's a better picture of it.  I found a leftover star I had made for my Liberated Medallion quilt.  It was 3 inches across and worked perfectly in a 9 inch block. 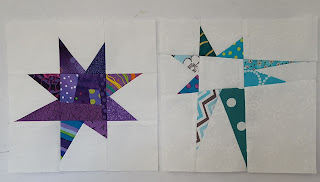 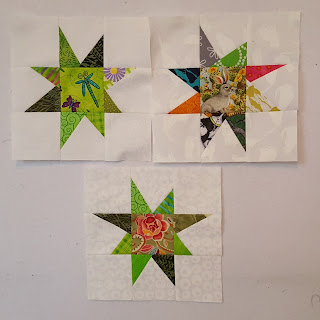 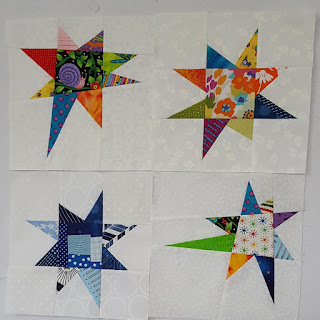 And all the rest of them!  You can see that some of them were pretty calm and then a couple of them went wild and crazy!  This was probably the most fun swap I've ever done.   @bylancer is probably going to do another swap sometime this spring, and I'm ready to do more!

Now I'm going to do a Wonky demo at the Tacoma Modern Quilt Guild this month, so I have to get busy and make some more examples of Wonky stuff.  It'll be fun!

The other swap I've committed to is the 6" churn dash block in the Modern Group of swappers with Barb of Fun With Barb blog..  #fwb2018blockswap, if you're on Instagram - check it out.  You can also see Barb's tutorial on how she makes the little blocks.  I haven't started my blocks yet, but I'll be ready in the morning.  I hope they won't take me too long - I have to be done and have them ready to mail by the end of the month.

Labels: Blogiversary, creativity, free-piecing, maverick stars, patchwork, playing with blocks, stars, travel
Newer Posts Older Posts Home
Subscribe to: Posts (Atom)
For all of us, the key is to pay close attention to which activities make us feel most alive and in love with life - and then try to spend as much time as possible engaged in those activities.