Well, what happened around here??  I can't believe it's been so long since I posted last.  Really, I didn't fall off the earth or anything.  It's just been busy around here, plus we've been battling a host of nasty computer viruses.  (I really hate computer viruses.  Don't get me started.)  Wow, here it's the middle of August already - summer is just flying by.

We've been so busy with pottery-related activities.  There's a once-a-month sale activity that's been happening, and a big Street Fair where DH spent two days sitting in the sun, demonstrating throwing pottery.  He was a big hit, and made a lot of pottery that weekend.

Last weekend we had our big pottery sale of the summer at the local Art in the Garden.  That was very successful, in spite of a lot of rain on Saturday.  Everyone closed up shop early that day, and it was still the biggest sales day in their history.  It was for us too!  We had showers off and on most of the day, but by about 3 o'clock the rain settled in and didn't let up.  It's a good thing pottery is water-proof!  Sunday was still overcast, but not too cold or hot.  The gardens were so beautiful.  Here's just a sample, which was "part" of our booth.  (You can see how overcast and threatening the sky was.) 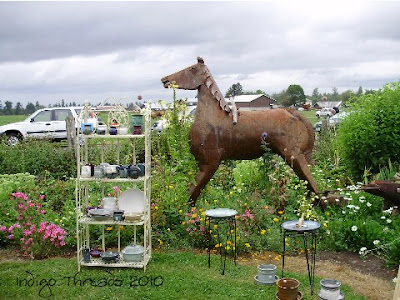 If you look closely, maybe you can see our friendly dairy cows across the road from us.  They were pretty curious about what we were doing! 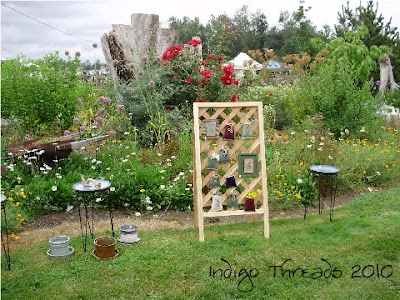 This week DH is doing "pottery camp" for some children of friends.  Right now we have the 9 year old here for 3 days, and then later in the week his 7 year old brother will be here.  Today was spent practicing in the pottery studio, plus fishing and canoeing in the pond.  Tomorrow starts the real deal!
I have hardly been back in the quilt studio after finishing my color challenge quilt.  What with being so busy, plus now it's so danged hot, I just haven't made it there yet. The studio is on the southeast side of the house, and it heats up real early and then never cools off.  So I have no desire to get in there.  Maybe by the end of the week, when it's supposed to cool off.
It's also been too hot to be upstairs in the office, so I haven't been on the computer much since DH got it working right again.
Last week I was brave and did something I've not done in over 20 years.  I entered some quilts in the county fair.  We had such a poor showing last year (maybe 10 quilted items total), that we were soundly "encouraged" (think arm-twisting!) to enter more this year.  So I put three quilts in.  We were told that they wouldn't be judged this year, but then they were!  Ack!!  Not ready for that!  Thank goodness I took the sticker roller to them to remove most of the cat hair!
So, I know you're dying to know which quilts I entered, aren't you?
First, I entered "Carrie's Quilt", made with the vintage 30's fabrics. 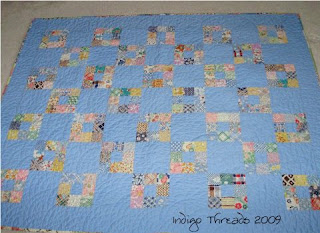 I entered "Touch of Black". 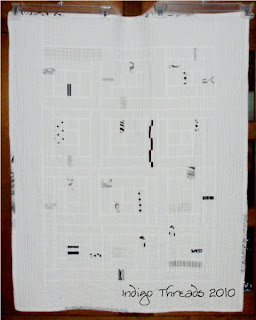 And, I took a deep breath and entered "Button Button".  I only did this because I thought we wouldn't be judged.  I thought it was too "different" to do well in a judged competition. 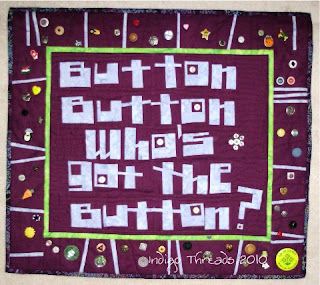 Well, guess what?  The quilts were judged after all.  *gulp*
And "Carrie's Quilt" got a blue ribbon!  The judge said "good choice of design for the fabrics".
And "Touch of Black" got a blue ribbon! The judge said "Interesting idea, intriguing to study"  and she liked the wavy quilting lines but didn't quite seem to "get" that the lines were supposed to be unevenly spaced.
And "Button Button" not only got a blue ribbon but a pink "Best in Class" as well!!   The judge said "Clever idea, well presented - do enter again next year!"  She like it!  She really liked it!  (with apologies to Sally Field)
I found out about the ribbons when we went to the fair with our granddaughters and our friend K~, the "other' grandma.  Man, was I in shock!  Pleased as punch too, of course.  I still have a big grin on my face.
Congratulations to Sue over at "From The Magpie's Nest" blog, who also entered quilts in her county fair, and also did very well.  Go see.  I'll wait.
We liberated quilters did pretty well for ourselves, didn't we?  *huge grin*
Remember the ceramic pendants I showed in this post? (scoll down a bit) Well, Lis over at Online Quilting blog bought two of them from me.  She has completed one necklace and you can see the necklace here (you need to scroll down a bit, again).  Wow, she did an awesome job.  She made it look so good!
Do you like silly cat videos?  This one involves 2 curious kitties and a treadmill.  Watch that black & white cat's reaction when his sibling touches him
I hope it won't be so long before I post again.  Maybe next time I'll have something new to show.  Maybe not.  But I hope we all have some fun being creative between now and then!
Posted by Sharon at 11:45 PM 22 comments: 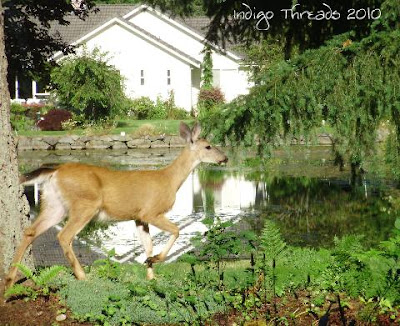 Here are some photos of the visitors to our yard one day this last week.  DH managed to get some good shots of them through the kitchen window. 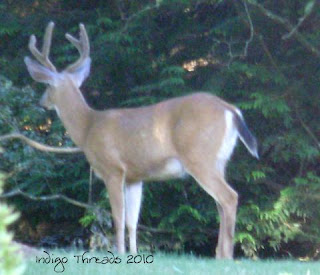 We have quite a bit of deer coming through our yard.  They like the ivy, and they also use our yard to get to the park next door.   I really enjoy watching them.
OK, I'm really pretty behind here, but I wanted to show you some of the pictures of a quilt show I went to a week ago.  It was in Covington, WA and was a pretty big show.  Great quilts and lots of good vendors too!  Yes, I did a little damage.  Sorry, I forgot to get pictures.
As usual, my photography isn't great.  I swear, all the quilts really were hanging straight!

Their guild challenge this year was using any 3 or all 4 of the selected fabrics and then making a small quilt that reflects the seasons.
I thought the ribbons were beautiful, and a lot of work, especially considering how many ribbons there were!

Did you notice the announcement of Lazy Gal Tonya's book release over on my side bar?  I'm so excited about this!  And I'm also jazzed that two of the blocks I sent her are in the quilt that's on the cover!  They're "HOME" which is 4 rows down, and 2nd from the right and "MAKE" which is in the bottom right-hand corner.  All of these blocks were made by students and friends of Tonya.  She requested happy 4-letter words, made with her free-pieced method.  I love that lots of people made these blocks.

I've hardly been in the quilt studio since I finished my challenge quilt.  I knew that would happen.  It was just time for a break.  But we've got the county fair coming up in less than 2 weeks, and I have to turn in quilts this week.  I'm thinking I need to quilt and bind one of my little Lib Amish challenge quilts before they need to be turned in.  Hmmm. . . . I wonder if I really have time to do that?
Posted by Sharon at 5:07 PM 15 comments:

Labels: quilt show, wildlife
Newer Posts Older Posts Home
Subscribe to: Posts (Atom)
For all of us, the key is to pay close attention to which activities make us feel most alive and in love with life - and then try to spend as much time as possible engaged in those activities.