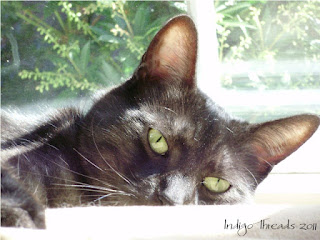 He was a shelter kitty and was with us for 9 years, and he has left a gaping hole in our hearts and our home.

He had a huge personality and got a lot of life out of his 9 years.

He started losing weight suddenly in November, and I got him to the vet in early December.  He was also breathing much harder than he should have been.  Dunkel continued to lose more weight and decline over the rest of the month.  He was down a total of 4 pounds by last Thursday.  The vet was mystified about what was wrong with him.  He considered thyroid issues - No.  Then Feline Lower Airway Disease - No.  Then an enlarged heart - ?   All the tests and Xrays showed no clear answer.  But by Sunday morning he was in great pain, bleeding from his mouth and couldn't breathe.  Unfortunately, he passed away on the way to the vet.  The vet's best guess was possible lung cancer.

So, now Dunkel has crossed the Rainbow Bridge. He has joined all my other pets and I know I'll see them again some day.

My worry now is Shade.  He knew something was wrong with Dunkel and stayed close to him for the last week.  He is wondering where Dunkel has gone and is missing him.  We're trying to give Shade lots of love and attention to help him through this transition time.  We're all missing Dunkel.
Posted by Sharon at 1:49 PM 11 comments: 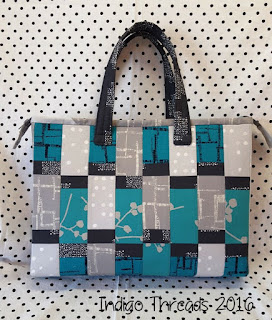 On my last post, I promised that I would show you what I received from my Secret Santa.  Here is the wonderful, beautiful tote bag that J. made for me!  I love it!

It's a great size and I can fit what I need into it.  It's padded so well that I could use it for a case for my laptop.  The handles are padded and very comfortable to use.  And I  love the pattern AND the fabrics J. used for the tote.  Thank you so much, J! 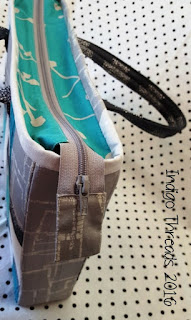 I'm very impressed with the inset zipper.  I've never tried one of those before. 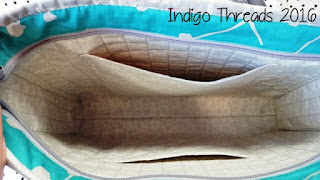 Here's the inside.  Two pockets!  And you can see how well padded it is.  J. did an awesome job on this - it's perfectly sewn and constructed.

I just took it to a guild meeting today, and I even got the bulky guild camera in here with no strain.  The tote holds quite a bit of stuff.  I'm really happy with this one! 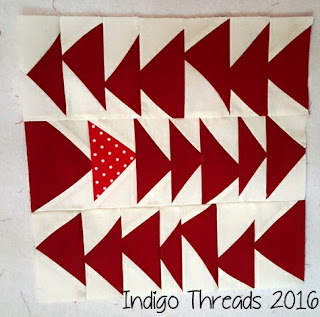 The Block of the Month for the Modern Quilt Guild in December was our choice of block in red and white.  So, inspired by Audrey's Tipsy Geese quilt on Quilty Folk blog, and the fact that I've had Sujata Shah's Cultural Fusion book for a while now and I've wanted to play with that, I made the wonky Flying Geese block.  I had to throw in the little bit of dots just for fun! 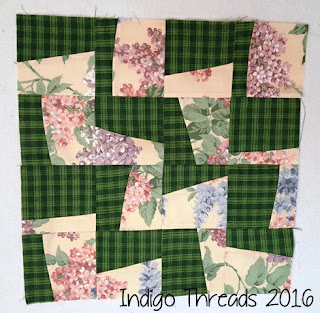 A couple of months ago, I decided I wanted to try the Rail Fence block from Sujata's book.  I made this sample with some old fabrics that were lying around.  (the question I asked my resident Linguist about whether I should say "lying" vs "laying" caused a 10 minute linguistic discourse!)

Ever since I got this block done, I've been thinking about what fabrics I want to use for this quilt.  There are so many great ideas of what others have done using this block. (see the Cultural Fusion Quilts blog)  I've even pulled out a big pile of fabrics, but no decision yet.  I'm thinking of using some of my greens since I have so many of them I can't squeeze any more on the shelf!  But what to put with them?  Do I want all florals with them?  Do I want to put some purples with them?  What do I want to do????    So, my thinking cap is on.  I'll let you know when I decide!

Maybe I should just start making one or two blocks and see what develops.  You know, not plan out the whole thing in the beginning but let the quilt evolve.  Hmmmmm.....

Have a great weekend!  I hope you get to spend some time being creative!
Posted by Sharon at 6:35 PM 5 comments: 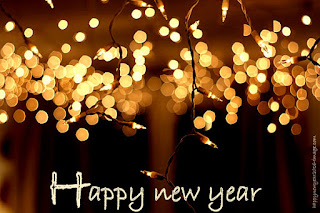 Well, 2015 has gone down the tubes and now it's the start of a shiny, brand-new year!  I hope everyone had very happy holidays.  And I hope 2016 will be a good year for all of us, with all the quilty goodness one could hope for.

I'd like to take a moment here to say "thank you" to all my readers who stick with me, through the dry spells when I don't post.  December was one of those times.  I just had so many things going on that blogging just kind of fell off my radar.  But I was sewing and having fun times.

My granddaughters did another year of ballet, with the December recital being, as usual, selected pieces from the Nutcracker.  It's fun to see them in the different roles and watch how they've progressed from year to year.

We had a very fun Christmas over at DS #1's house with the granddaughters.  We must have been good this year, because I think Santa was kind to every one of us.  Another aspect of Christmas I enjoy is seeing how the girls' Christmas lists have changed over the years.  Our oldest DGD has now become a teenager, and it's so fun to see how she's growing up.  I think the best part of Christmas Day was playing games with the whole family after dinner.  That was so much fun!

The big, fun sewing project I was doing in December was making a Secret Santa gift for another member in the Tacoma Modern Quilt Guild, that I joined this last year.  Her choice of style matched up with mine very well, so it was easy to make something for her.  The guild gave everyone a list of possible hand-made gifts to choose from.  We were to pick 5 things from the list.  That actually made it a lot easier.  So, one of the items my recipient chose was an insulated lunch bag,  And she likes text fabrics and brights with white. That sounded easy-peasy to me! 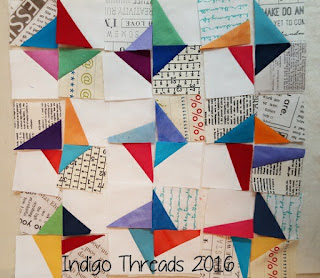 I took an idea from Quilting Modern by Jacquie Gering and Katie Pedersen, one of my fave books.  I was doing the improv piecing of the sew & flip triangles.  Very fun and easy.  This was test block #1.  It was so soothing to be doing improv again, just sitting and sewing bits together and then seeing how they worked together.  I want to do more of that! 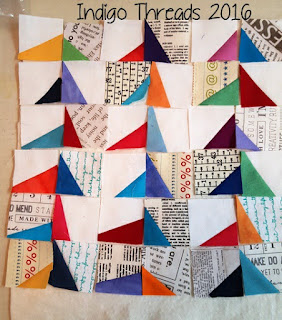 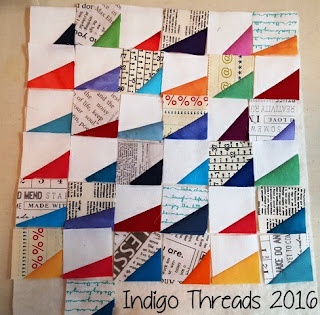 It was interesting to see that, even though I thought I was being totally random in my placement of the triangles, they all came out at similar angles.  I don't know if that's good or not, just interesting. 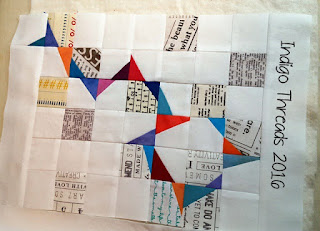 And this is the design I went with.  It was more fun and less expected than the layouts in the test blocks, which pleased me.  The pattern for the lunch bag I was using was this one from All People Quilt.  It was a pretty good pattern and easy to do.  The only thing I would change the next time I make this bag would be to make the bag bigger.

Once I had the front and back put together, I did simple straight line quilting, and I used Thermolam, the insulated batting that one would use for pot holders.  I thought that would insulate the bag pretty well.  I also used a layer of cotton batting, which in retrospect was too much.  Just the Thermolam would be enough, I think.  Of course, making the bag big enough to account for all the batting would help too.  The pattern didn't call for any batting, so that's one reason why it seemed to be on the smaller side. 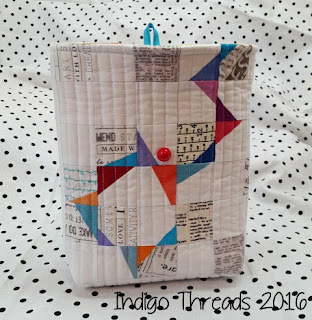 Here is the completed bag, with the top open. 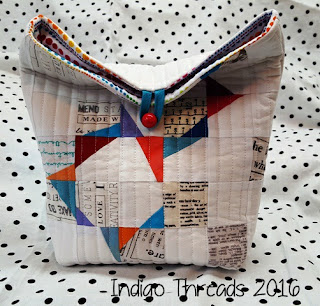 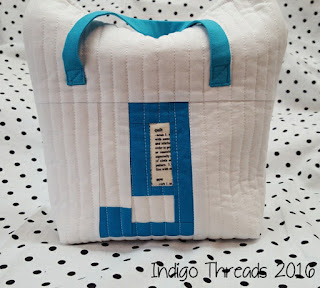 Here is the back of the bag.  My recipient's first name starts with G, so I thought it would be fun to personalize it for her.  I used Tonya's book Word Play Quilts, of course! 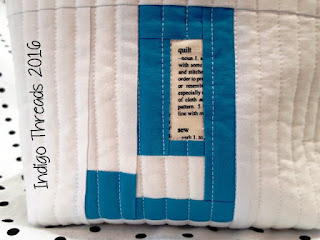 Here's a closeup of the text fabric I used in the center of the G.  If you  click on the picture, you can read what it says. 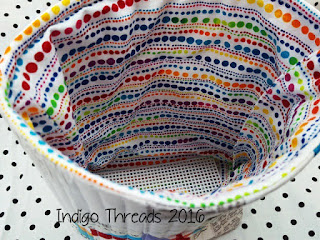 The inside of the bag.  I used some plastic canvas in the bottom to help the bag hold it's shape. 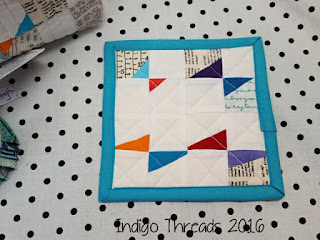 And I made a mug rug to go with, using the leftover scraps of the piecing.  I wish I had done the join of the binding a little better than that!  Sheesh!  That's kind of embarrassing. 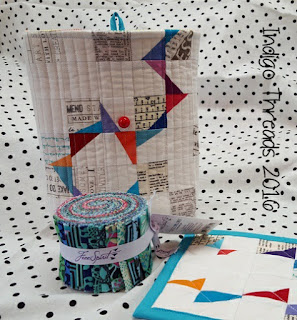 Here is the entire gift.  G. said her fave designer is Amy Butler, so I found this little jelly roll to include.

We had a fun Christmas meeting with the Tacoma MQG, and my recipient loved her gift!  Next time I'll share the wonderful gift that I received.
Posted by Sharon at 3:20 PM 5 comments:

Labels: bags, creativity, gifts, holidays, improv piecing, Lazy Gal Tonya's letters, patchwork, process, projects, secret project
Newer Posts Older Posts Home
Subscribe to: Posts (Atom)
For all of us, the key is to pay close attention to which activities make us feel most alive and in love with life - and then try to spend as much time as possible engaged in those activities.