Snow and a sneak peek 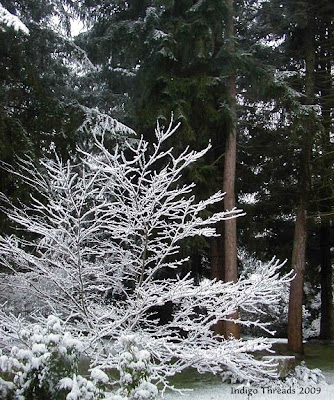 We got more of that white stuff last night. I love the way it looks on the trees. Spring is on the way, though. There are robins out in the back yard, hopping around in the snow. That's a good sign, I think. But now it's starting to snow again, in fits and starts. It's a great day to stay inside and sew!

This is a quick post, as I'm in the middle of some projects with a short deadline. I don't have much time to spare for the blog today, but I did want to update.

I got all my words sewn together on my Witch's Pantry project. I'm really happy with the way this is turning out! Now I'm re-thinking my original plan of how I was going to put this together, though. The 'words' part of the quilt is very bold, so I think some adjustments need to be made. I have some ideas that I'm considering, but I don't have time to play with this this week.


I was having some sewing machine issues this week, and my Bernina needed to go the Dr. Fortunately, I didn't have to wait but 24 hours! That was great. The price for the visit wasn't so great though. The machine needed a new hook, which cost $100! Yikes, that was a lot more than I thought it would be! 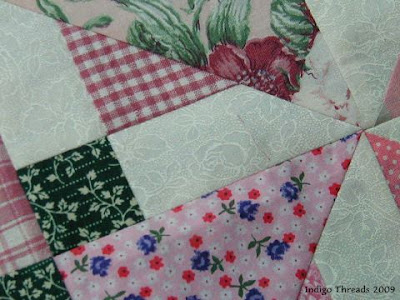 And, here's a sneak peek of one of the projects I'm working on. You'll notice an abundance of pink - that's a clue as to who this might be for! I'll share the rest when it's finished, I promise.
Now, back to the quilt studio! 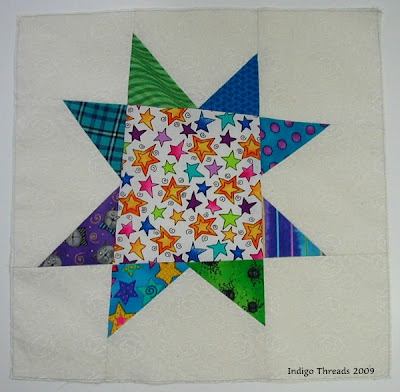 As many of you know, Australia has suffered through some of the worst bush fires in history lately, with the death toll at 189 people and rising, not to mention the loss of homes, pets and livestock. This has really rung a chord with me, after living in California for over 20 years. Californians know a thing or two about fires too, but thankfully not usually on this scale. I've never gone through a fire, but I've been too close for comfort to a few. These fires in Victoria have been so devastating. I can only imagine how terrible it must be for the survivors. House & Baby has a post on her blog where she discusses what some people have gone through. Warning: this will make you cry.

So, in response to this disaster, Tia @ Camp Follower Bag Lady, has started the BushFire Quilt Project. She is collecting 12.5 inch quilt squares of wonky stars, a la Gwen Marston. If you click on the button for the Bush Fire project on the right side of my blog, it will take you to the Flickr site for this project, where you can see the entire explanation of this huge undertaking. My hat's off to Tia!! If you want to contribute to this cause, there are tutorials on Silly Boo Dilly's blog that will teach you how to make a wonky star (click here), or if you'd rather not try the wonky star, they're also taking whatever 12.5 inch star you want to make.

I made 2 wonky stars to send to her, the one at the top of this post and the one below. Of course, I had to make my own versions of the wonky stars. *grin* 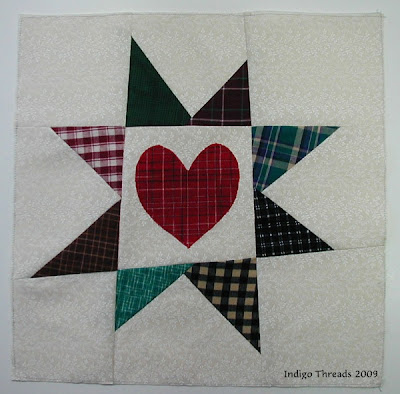 Since it was Valentine's Day, I couldn't resist adding a heart to the plaid star! (For some reason, I just can't get these colors to show up well.)

Then I read at the Flickr site that they are specifically requesting some stars that would be appropriate for boys/men. So, I made two more, just for the guys! 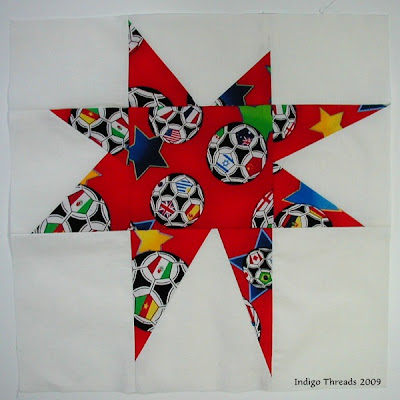 This one was for the World Cup of Soccer a few years ago. 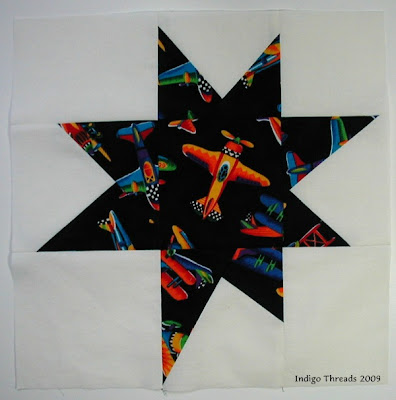 And this one has airplanes. 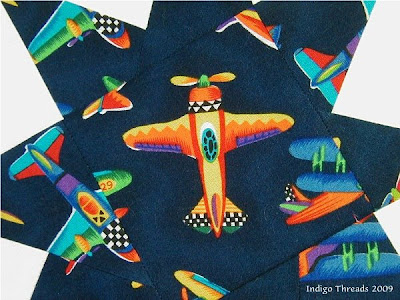 Here's a closeup of the planes star, which is more true to the color of the block.
I've also been working on my House Home & Pantry project. 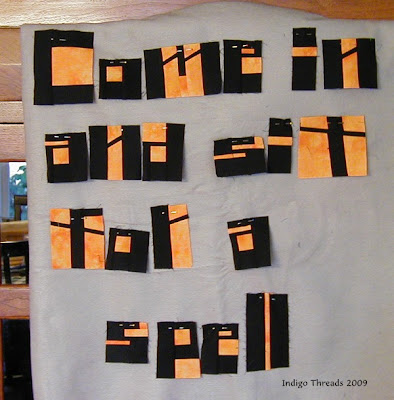 I finally got all my letters made. As I suspected, the "M" and the "S" were quite challenging. I re-made the M because I thought it was too bad, but the S's I'm keeping. Well, that's not counting the one I made wrong, because I got confused in the middle of it and it ended up not an S. Duh! Now I have some left-over letters to send to Tonya! 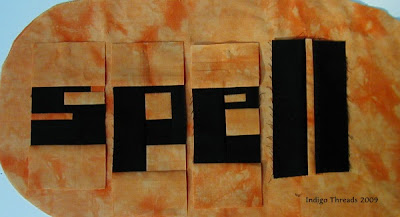 So, now the next challenge - putting all the letters together into a readable piece. I'm hoping this won't be too difficult. *crossing my fingers*
I'm also about to attempt something I've never done before - a crazy quilt block. (more on that next post, I promise) While searching the "innernets" for information on crazy quilt block embroidery (all the books on that subject live at my daughter's house in Nevada), I found a page on sharon b's "in a minute ago" crazy quilt site. These are some fantastic bras (yes, ladie's undies) that were made by Members of the Southern Cross Crazies discussion group and the Canberra (Australia) Crazy Qulters, at the First National Crazy Quilt Retreat in October 2004. They were invited to decorate a bra in order to raise funds for Breast cancer research. These delectable 'bustenhalters' are quite a hoot! (As usual, you can see a bigger image of each bra by clicking on its thumbnail picture.) And, by the way, sharon b's site has some awesome information on crazy quilt embroidery etc. She does some beautiful work - go take a look!
Posted by Sharon at 4:24 PM 6 comments: 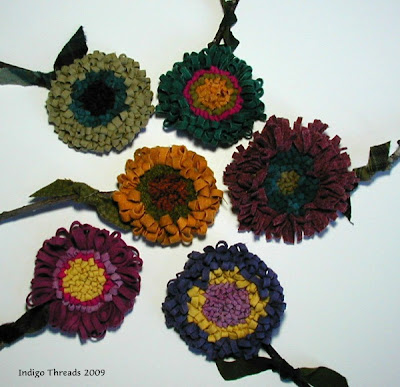 Feb 5th - my one year anniversary of blogging! Wow, what a great year it's been. I've met so many nice people and learned so much! The quilt blog community is such a great group of people...so sharing, generous, kind, understanding and very, very talented! And I love reading everyone else's blogs...to the point that, I have so many I enjoy, I have trouble getting into the quilt studio! Thank you to all who read my blog and thank you for all the wonderful comments. You brighten my days.

We had a great weekend with my sister. We had a nice trip to Bellingham. I really liked it there. And we stopped in Mount Vernon to buy some wine. The Pasek Cellars winery has the best cranberry wine! I don't usually drink wine, but I really like this one. Their raspberry and blackberry wines are great too. These wines don't have any grape wine in them, just the fruit in the name. Wonderful wines! So, we bought a few bottles. We had a good time with our niece...went to lunch, did some shopping and some sightseeing. It was a good day.

The photo above is my Christmas present from my sister. We didn't get together over the holidays because she was stuck in So. California and couldn't get home due to the bad weather here. So, this was our first opportunity to do our Christmas present exchange. Anyway, when my sister was visiting in August, I shared bags and bags of wool fabric with her. I have so much wool - more than I will probably use in my lifetime. And she was using her wool...and even buying wool! So, I thought I would share with her. Well, she made me these wonderful hand-hooked wool flowers! Aren't they cute? They're each attached to a stick from her yard. Very rustic-looking. And I have the perfect hand-made pottery pitcher to display them in. I just have to get some foam or something to help them stand up. Thus, no picture of them in the pitcher yet. I don't know if you can tell from the photo, but my sister has tied a strip of green plaid wool fabric around each stem for a leaf. I just love these!

Here's individual pictures of each one: 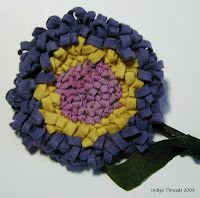 I love the hand-dyed lilac in the center of this one. And that chartreuse green is a kick with the purples. 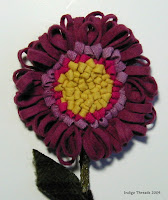 I love the long loops on this one. 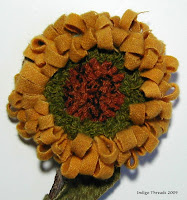 This one reminds me of a sunflower. 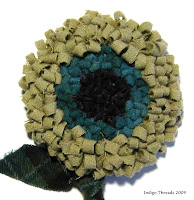 It's a really tough call, but I think this one is my favorite, because I love these colors. That's a dark purple in the center. Yum! 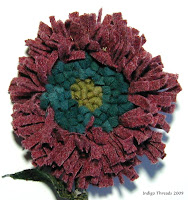 I love the outside strips on this one! 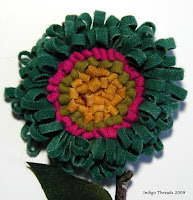 And I love that zing of hot pink on this one.
I just love wool. I guess because of growing up with it, in Michigan. We wore lots of wool. I love the smell of it. 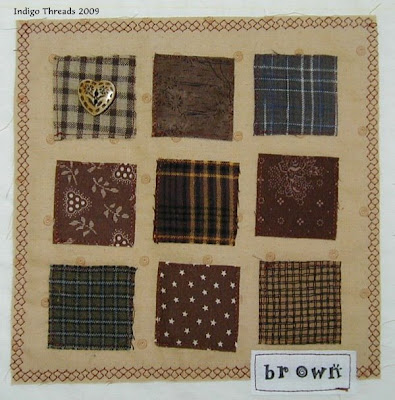 Here is the latest Color Book page. That square in the upper right is a funny grayed-brown. It didn't photograph well. It looks better in person, so to speak. The button reminds me of wood-burning and was the first element I picked for this page. I'm kind of stalled on the other pages right now. I have 4 more pages to do. And I'm still working on my Witch's Pantry project. I haven't touched it since last Saturday and need to get back to it. 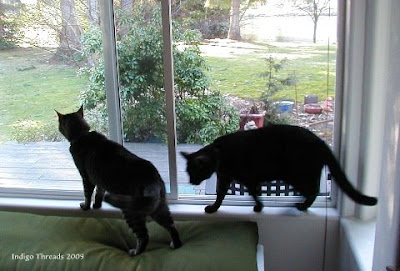 Here is Shade and Dunkel on Wed. It was almost 60* and I opened all the windows for some fresh air. The cats were watching another cat go across our yard, and they were kind of worked up about it. I think they were enjoying the fresh air too! It was a beautiful day.
We've been seeing on TV and hearing on the radio the most hysterical commercials. Pemco Insurance Co. has a great ad campaign about the people of the Northwest. You can go here to see their Helpful Guide to the People of the Northwest. My favorites are "Goat Renter Guy", "Sandals and Socks Guy", and I think the best one is "Blue Tarp Camper". Take a look and get your laugh for the day!
Posted by Sharon at 8:00 AM 13 comments:

Labels: blogs, cats, fabric books, wool
Newer Posts Older Posts Home
Subscribe to: Posts (Atom)
For all of us, the key is to pay close attention to which activities make us feel most alive and in love with life - and then try to spend as much time as possible engaged in those activities.