Making Some Progress - and A Quilt!

What a slacker!  I can't believe it's been nearly a month since I posted!  I kept meaning to, but just never really got to it.  I composed lots of posts in my head, but never actually made it to the computer.  Hopefully I can break that trend.

Things are progressing around here!  The physical therapy that I'm doing is starting to pay off.  I'm finally off those darn crutches and am now using a cane.  (I should feel dapper, maybe, but I don't.)  And I am starting to wear a shoe - well, a sandal.  My ankle is still swollen and the shoe hurts, but I'm very tired of walking across parking lots and public restrooms in a mostly-bare foot.  (I still have to wear the brace)  The worst was the floor in the movie theatre - ick!  I'm starting to get around pretty well, and actually went to the grocery store by myself yesterday for the first time in 2 months!  Who knew that going to the grocery store would be something to celebrate?  hee hee!  It was a short trip, and I was pretty tired by the end, but I did it!  Just as an aside here - a cane and a shopping cart are an awkward combination, especially when the thing doesn't fit into one of those cute little carts.  The whole thing with this injury has been a lesson in patience, which I've never been known to have in abundance.  I think a little humility was thrown in there too.

Here is a quilt that has actually been done for a while, but I don't think I've ever shown it here.  This was a charm square project.  I bought the charm squares and all the companion fabrics years ago, and finally got this finished.  The fabric was "Vienna Nights" by 3 Sisters for Moda, for those who might care.  Charm squares were a brand new thing then, just to give you an idea of how long ago it was!

It's not my favorite quilt.  It's lovely enough, and there's nothing wrong with it at all.  I just feel like it's got no "soul".  There was none of "me" put into this quilt, if you know what I mean.  No creativity. I made two quilts this way, and I learned my lesson.  (you'll get to see the other one as soon as I finish the binding!)  I don't think I'll ever make another quilt just from one line of fabric.  I guess I'm a scrap quilter at heart!

I'm actually going to be trying to sell this quilt at the quilt show next month.  No one in the family is interested in it, I don't care, and maybe I can make some money to use towards a new computer.  (Mine is an XP, which is pretty much a dinosaur.)  I've never sold a quilt before.  Have you ever sold a quilt?


I got my little "leftovers" quilt all quilted and bound now.  It feels good to have another finish!

I'm starting to put the finishing touches on my things for the quilt show.  Putting on bindings and labels, etc.  I have to have my quilts turned in by Oct. 1st, so the heat is on!

I thought I would share a little trick I use for putting on the binding: 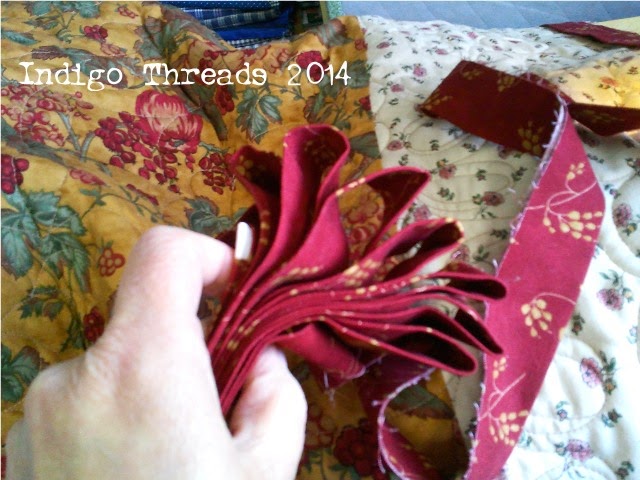 After the binding is made, I do a fan fold with it.  Hopefully you can see what I mean from the photo.  I used to wind it onto a small ruler, but it always got all twisted up.  So I tried using the fan fold, which doesn't twist it at all.  My DH fan folds (instead of wrapping) all his electrical cords before he stores them, which gave me the idea. 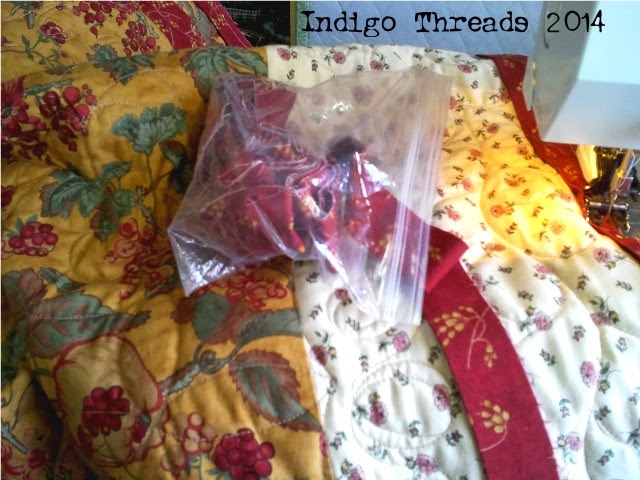 Then, I take the fan folded binding and put it into a zip-lock baggie. I close the opening of the baggie except for a hole big enough to feed out the binding.  Then I drop the baggie onto the floor between my feet and start putting it on the quilt.  I've never had it hang up or twist on me, and it works a treat!  I don't know how others do it, but this is my way.  Anything that makes it easier to do is good to know.  Let me know if you try this and how it works for you.

It's been pretty warm here for the last few days, but I think that's just Indian Summer.  Leaves are starting to turn, and the nights are getting pretty chilly.  We were down in the 40's the other night.  The geese started flying north in mid-August this year, which to me seems really early.  Everything seems to be starting earlier this autumn, which to me says we just might be in for a bad winter this year.  I didn't seem to get enough summer this year, just because I couldn't get out and enjoy it so much after mid-July, when I had my accident.

Labels: autumn, bindings, creativity, injury, little quilts, log cabins, quilts
Newer Posts Older Posts Home
Subscribe to: Posts (Atom)
For all of us, the key is to pay close attention to which activities make us feel most alive and in love with life - and then try to spend as much time as possible engaged in those activities.