I've been MIA around here for too long.  It's been a tough Spring.  We had such a wet winter and spring that the allergies are so bad this year!  I've been feeling tired and like I'm in a fog most of the time.  So, not too much sewing.  It's hard to be creative when you can't think.  I think we're almost done with the worst of the allergies now.  Just have to get through the cottonwood and fir trees "doing their thing".   We finally have some warm, dry weather and it's so nice.  Although crazy.  Yesterday was in the low 80's, today's almost as warm and then tomorrow will be a high of 63* and rain.  Like I said, crazy.  Maybe my expectations are too high?

I have managed to get a few things accomplished since I last posted. 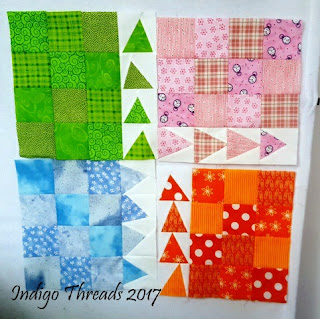 I'm the chair of the Block of the Month committee for the Tacoma Modern Quilt Guild, so I've made some sample blocks.  The blocks above are called Urban Chickens.  I really like this block, and may end up making some for myself.   If you want to too, you can find the tutorial for these here on Wombat Quilts blog by Cath.  The "geese" (chicken beaks?) are done improv style.

We did Offset Square blocks, which are fun and easy.  That tutorial is here on Diary of a Quilter blog by Amy Smart.  I think these are great for a kid's quilt....kind of an Eye Spy thing. 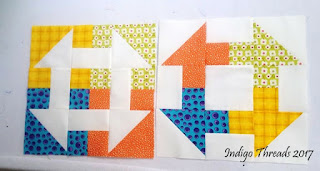 And we did the Funky Wrench - Nuts and Bolts blocks.  You cut out two blocks at a time and get a dark/light effect with the blocks.  That tutorial is here on the Happy Zombie blog by Monica Solorio-Snow. 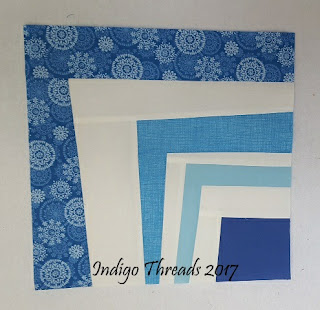 This month for Tacoma MQG we'll be doing improv blocks with the leftover scraps from the guild's raffle quilt.  Since the raffle quilt is all curves and circles, the theme for these improv blocks will be lines, angles and triangles.  I handed out packets of fabrics and I can't wait to see what every one comes up with. 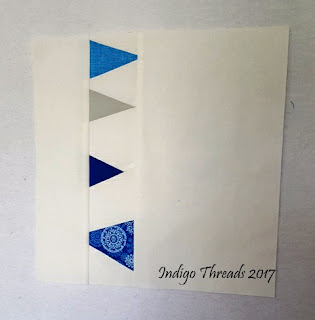 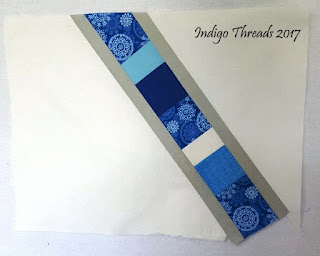 This last block was an "oops" and I need to re-do it.  I cut my base fabric too small and couldn't get a 12" block out of it.  Sometimes improv doesn't work the first try.  That's just part of the process. 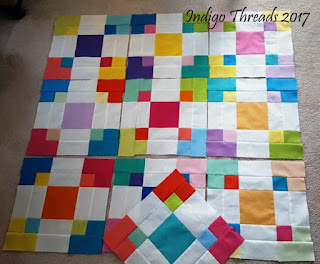 More blocks!  This time was for an exchange with my friends in California.  Some of the blocks will be in a charity quilt and the remainder will be in a drawing and someone will win all of them.  These were fun to do.  The tutorial for these blocks is here.  I think this will make a fun quilt. 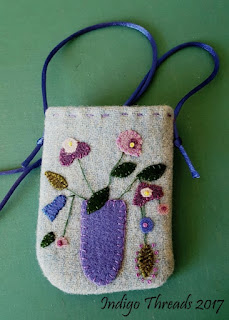 I finally finished a little wool pouch.  It was almost done and it took next to no time to get it done.  I still need to find my Fray Check so I can trim the ends of the handle. 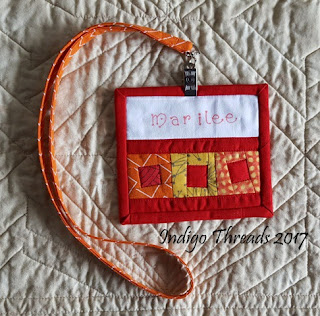 We had a name tag swap at the Tacoma MQG.  This is the name tag and lanyard I made for my swappee.  It took me two tries to get the lanyard right, but otherwise it was fun and easy. 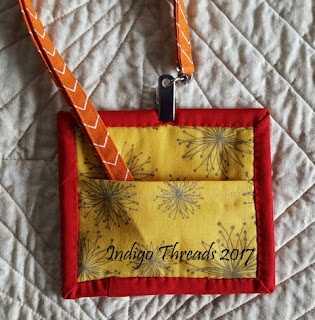 I even included a pocket on the back. 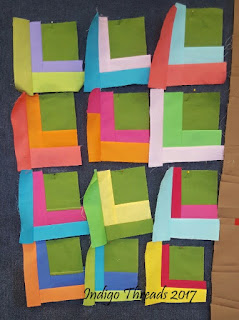 I've finally gotten my improv housetop blocks that I started in the class I took with Gwen Marston "Abstract Quilts in Solids" to the flimsy stage.  The photo above is from the workshop. I decided that I really like the blocks on that dark background and thought I would set them that way. 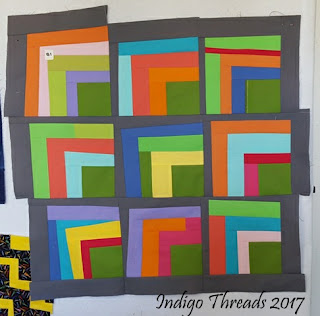 This is the bottom three rows on the design wall.  I added the grey around the blocks to recreate that background look.  But look at the top left block - that wasn't going to work the way I wanted it to.  So I took the block partially out and trimmed it down. 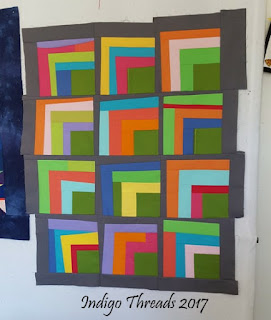 And this is how it looks today.  Doesn't that first block (on the left) in the 2nd row look better now?  That's the fun part about improv.  If it's too big, cut it off and if it's too small, add to it.

Now I have to figure out and decide what to do about the outer edges.  Border or not?  Hmmmm....  I think I want to repeat the green in the center squares, but maybe in a border or maybe just binding.

I had some fun with the blocks, deciding on the layout I wanted.

I really liked layout #2, but I think I want to save it for another project.  A "someday" project.  Actually, I like most of these layouts.  I debated the layout for about 2 weeks before I decided. 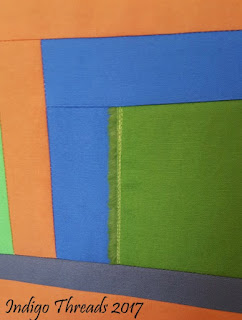 I don't know if you can see it in the photos of the top, but I did something a little different in two of the blocks.  Frankly, I shamelessly copied this idea from someone else in the class.  I left the raw, ruffled selvage edge on the outside.  Just a fun little touch. 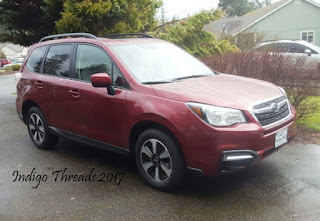 I don't think I've mentioned this before now, but in March I got a new car....my very first brand-new car!  A Subaru Forester, and I LOVE it!  My old car was 20 years old and didn't even have power door locks.  This baby has most all of the bells and whistles.  My only disappointment was the fact that it's red, and that it was the only one available with the features that I wanted.  My old car, that I had for 20 years, was red and I was hoping for something different.  But I'm happy as a clam with the car in spite of that.  I guess the universe thinks I need a red car!  *grin* 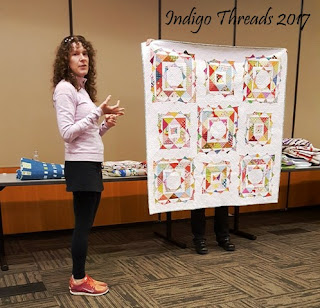 Last week @ MQG meeting, Katie Pederson of SewKatieDid blog and co-author of  the book Quilting Modern was our guest speaker.  She brought a ton of her quilts.  This one is her "Double Trouble Take Two" quilt.  I'm excited to play with this technique.  It's a combo of precision HSTs and improv triangles and she used mostly scraps. 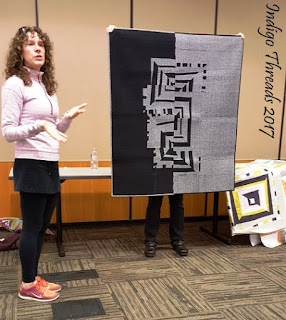 And this quilt is called Skewed Symmetry.  Isn't it striking?  One of my favorites!

I'm linking up today with AHIQ- share your improv #21 on Sew Slowly blog.  You might want to  check out all the other links to see what others are doing.

Newer Posts Older Posts Home
Subscribe to: Posts (Atom)
For all of us, the key is to pay close attention to which activities make us feel most alive and in love with life - and then try to spend as much time as possible engaged in those activities.