I thought it was time to spruce up the ol' blog.  I love to re-decorate and move furniture to new spots.  I guess this falls in the same catagory.  I hope you like the new look.  There'll be more changes soon, when I've got time to get to them.

Back soon with quilt-y content!
Posted by Sharon at 1:17 PM 9 comments:

I made it! I finally got my challenge quilt finished, with about a day to spare. I worked on nothing but the quilt for almost a week.

Why do I do this to myself? I know I'm not alone in this either. I had a whole year to get this done - well, not really, due to the broken arm and the Spring thumb injury. But still, I stalled. I'd like to say next year will be better, but we'll see how that works out. (We've already gotten our "assignment" for next year . . . more on that another time . . . ) 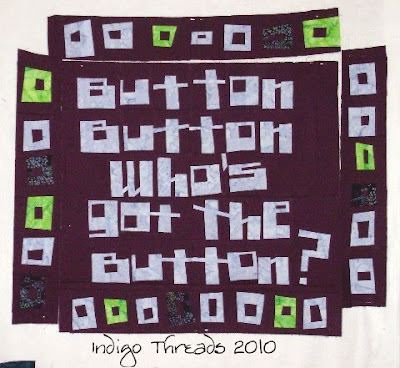 If you haven't noticed on my side bar, I've taken the Process Pledge. So, I'll discuss my process some here. Here is the quilt top with the borders I showed on my last post. Guess what? I didn't like this! I love these borders, but I thought it was too busy for this piece. It kind of took over from the letters, which I wanted to feature. Plus, it really wasn't going to work with buttons all over it. It was just too much. Fortunately, I had only sewn on one border.

So, what to do next? I pondered that for a day or so. I decided an inner border would work well to seperate the words from the border, and I was hoping the lime green batik would work. I think it adds a nice little zip! 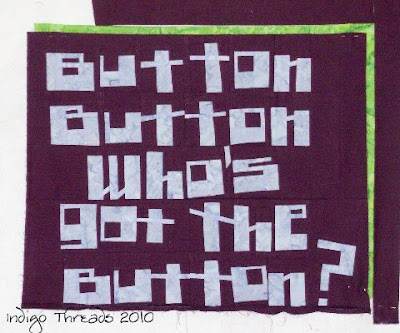 Then, what do to for the outer border? I was running out of my fabrics. I only bought a 1/2 yard of the light batik that I used for the letters (I have no idea what I was thinking!) and one yard of the background, that I thought would be more than sufficient (it was just barely enough!).

Then I remember Melody of Fibermania's Process Pledge tutorial on her Fused Piecing. Voila! That would do the trick! Thank you, Melody! You saved my bacon. To piece in these tiny strips that finish @ 1/4 inch, I would lose 1/2 inch in the seam allowance. So, by fusing these strips, I saved time and fabric. Yippeee! 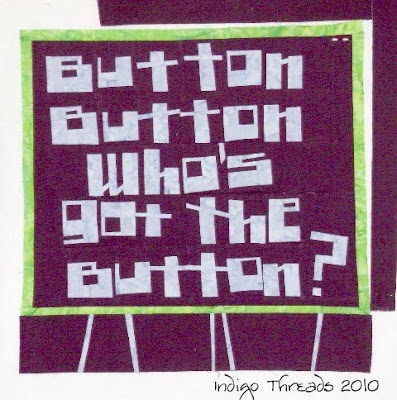 Here is the first border. This was just what I was thinking of. In fact, it was Just Right. So, I kept going. 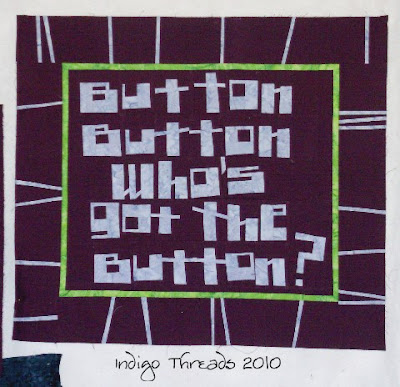 Here are all the borders on. Now I just had to quilt it, and then sew on a bunch of buttons. (technical term: 'bunch')
So, for the back I used something from the stash that I had a lot of, and proceeded to quilt. I kept the quilting simple. Just some squiggling around the words, and straight lines in the border that echo the fused strips. I knew the buttons would secure the border enough that only minimal quilting was required. 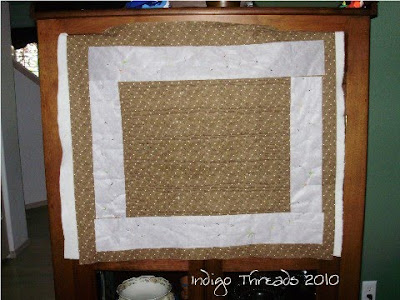 Then, to help stabilize the quilt, I added some interfacing on the border areas on the back of the quilt. So many of the quilts I've seen with buttons on them get saggy. I was hoping the interfacing would help with that. And I think it worked pretty well.
After I sewed on the 'bunch' of buttons, I added a second back to hide all the ugly knots from the buttons and the interfacing. I quilted around the inner border to secure it in place, then basted the edges and sewed on the binding. The binding fabric matches the fabric that I'll be making my studio curtains from. It just worked out that the colors go together, so this quilt will hang in my quilt studio. It went really well . . . I was terrified that I would run into difficulties, but it was slick. So, big Happy Dance! It was done and I even had time leftover to make my pot luck dish and get a good night's sleep! 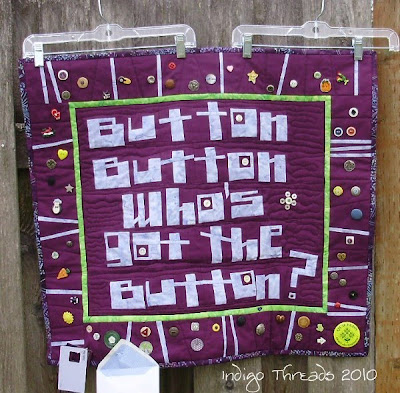 Ta Dah! Here it is at the Challenge Quilt Reveal party. I didn't end up with as many buttons on the quilt as I thought I would. The big button in the lower right hand corner is my tongue-in-cheek poke at myself. It says "Quilters don't do buttons". *grin*
Many of the buttons on here are special to me, like the buttons from the very first piece of clothing I made for myself after I got my very first sewing machine back in 1975, buttons from projects for my children, buttons to represent my Mom, where I grew up, etc. I did some stacked buttons, and some fancy ways to put the buttons on, all kinds of stuff.
Oh, and I ended up with a 3rd Place ribbon in the Pieced catagory. That was better than I was expecting!
I thought you might like to see the other Challenge quilts. We didn't have a very big turn-out this year; there are only 13 quilts. And I missed getting a photo of the pieced pillow that won Viewer's Choice - rats! The quilts range from tablerunners and wall-hangings to bed-sized quilts. (the envelopes were for the voting ballots) Here they are, in no particular order: 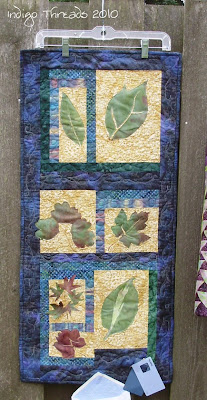 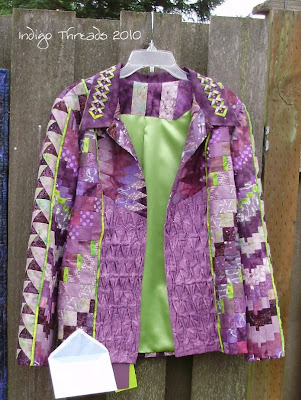 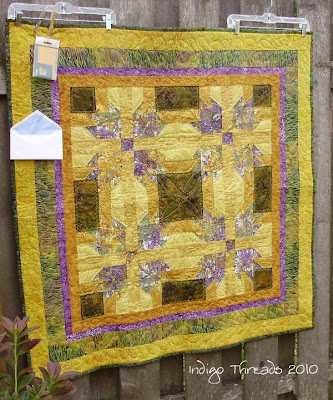 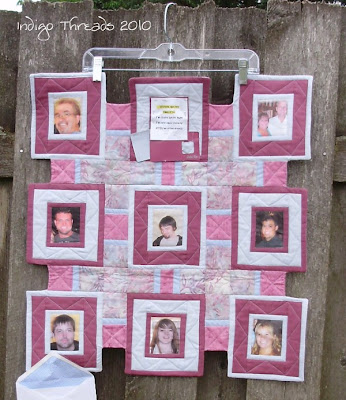 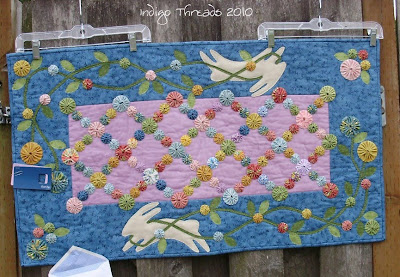 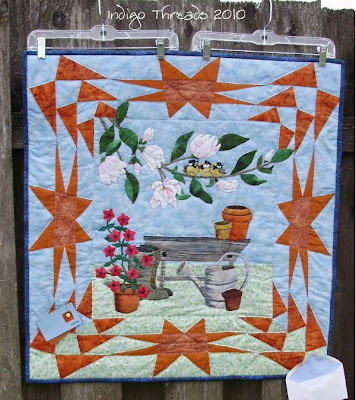 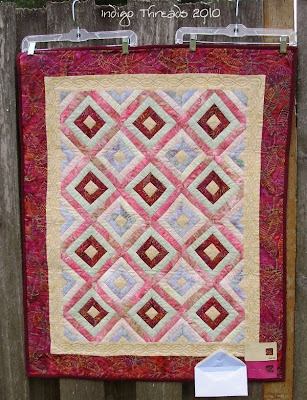 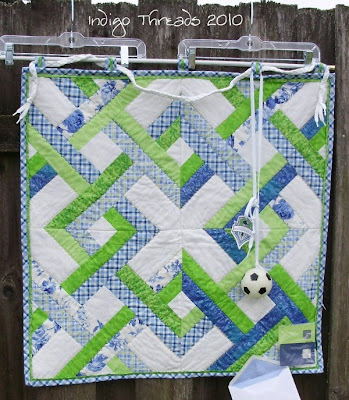 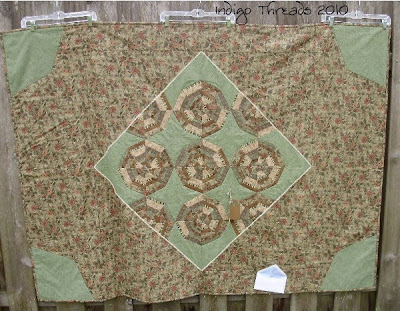 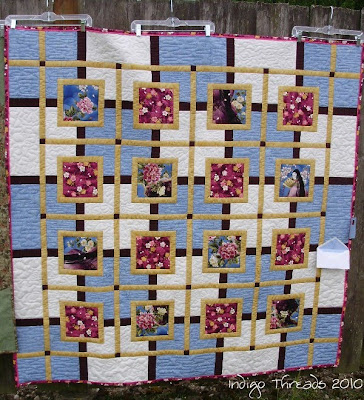 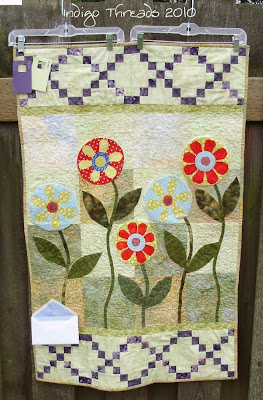 Now that the challenge quilt is done, I've taken some time to recouperate. I'm catching up on some stuff around the house, and cleaning up the studio. Next up is some things I've gotten behind on.
Have a creative day!
Posted by Sharon at 2:11 PM 18 comments:

We're having our first heat wave of the year right now. We've been very cool here this spring and early summer . . . cool for the Pacific Northwest, even. As few as 4 days ago, the heat in the house was still coming on early mornings and nights. I kid you not! We were in the 60's and drizzly rain for the 4th celebration. It's said that summer doesn't start around here until after the 4th of July, so we're right on schedule. Because now summer has finally arrived. Yesterday we hit 87* F, and today and tomorrow we're supposed to be 90* or more.

I've been out watering the yard the last few days, so my new little plants don't croak in the unusual heat. So, I thought I'd take some photos while I was out there. 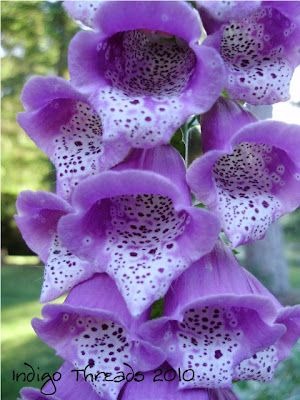 Here's my 6 foot tall Foxglove. This was taken at eye level! I think it's the tallest one I've ever had. This was a wonderful volunteer plant. Foxgloves grow wild all over here, and almost all of them are this color. 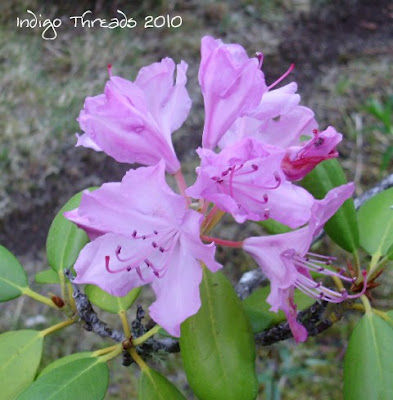 Here is one of the last two rhody blooms for the season, both of which are on the same plant. 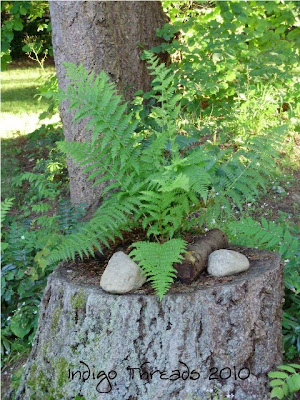 Here is our terrarium that we planted last year. I thought I had put a picture of the start of this on the blog last year, but I can't find it. So you'll have to trust me when I tell you that this is thriving! That fern is about 3 times the size it was last year. I wish all my ferns grew that fast! We have a wonderful woodland-type back yard, and all the plants we put here are from our yard. 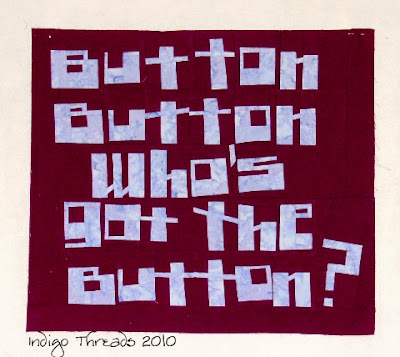 I've been busy sewing on my challenge, and finally have the center all put together. I still think putting all those crazy pieces together is the hardest part. This is pretty close to the true color, which is a deep red-purple. The lighter batik is pale violet.

Now I'm starting on my borders. I had a hard time making up my mind what to do for the borders. I decided to go with this design because I think these kind of echo the shape of the O's in the words and also are kind of a button shape, which will echo the buttons I'm going to embellish this with. Three more to go.
I have one week to finish this, so I'm trying to sew like crazy and not panic. It's too hot to be in the quilt studio until late in the afternoon, as it's on the east side of the house, which has no shade. And we have no air conditioner, as we only need it a few days a year. So, my studio time is limited. There may be some late nights going on around here. Wish me luck!
Posted by Sharon at 12:44 PM 16 comments:

Labels: challenge quilts, flowers, weather
Newer Posts Older Posts Home
Subscribe to: Posts (Atom)
For all of us, the key is to pay close attention to which activities make us feel most alive and in love with life - and then try to spend as much time as possible engaged in those activities.