Rainbows On A Cloudy Day

Yay!  I have finally finished and am able to post my project that I started back in March of 2017, in a class (the last class!) with Gwen Marston.  You can see where I started this project on this post.

I actually had this finished for the guild quilt show at the end of September, but this is the first it's been posted anywhere.  It's so difficult to get a decent photo here - it's usually so dark and gloomy.

That's why I call this quilt "Rainbows On A Cloudy Day".  It's cloudy here, more often than not.  I've also never seen so many rainbows as here in the Northwest - more than I've ever seen anywhere else I've lived.  No matter how many times I see a rainbow, they are always magical!

I actually picked out the colors for this before I'd decided what pattern to use.  That was my sister's suggestion, as I had no idea where to start for something for this class.  I was a little intimidated to use only solid fabrics! 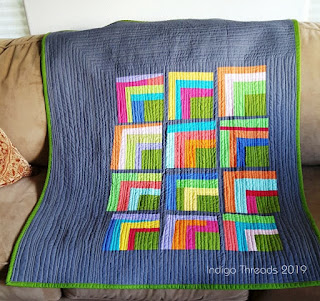 So I decided to break out of my usual color palette and try something a little different.  I picked what seemed to me like kind of tropical colors.  The grey background came about because I was using a grey wall at the workshop to pin up my blocks on, and I really liked how the dark set off those colors. 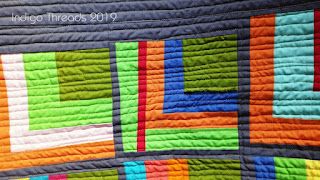 You can see here that I used a little bit of the raw edge "fluff" on a few of my middle squares.  Just something fun and different to do.  I probably could have used more.  Oh well. 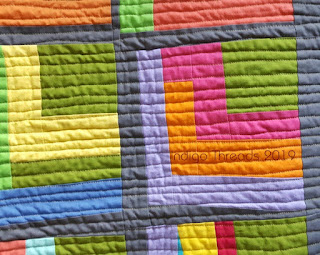 And I like Gwen's idea of letting the colors "bleed" from one area to another.  I think that makes the blocks a little more interesting.  I also randomly changed colors in a number of the rounds in the blocks - again, just something fun and interesting. 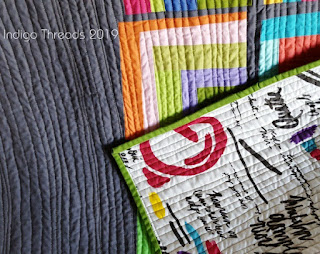 And for the back, I used a piece of fabric that had been given to me.  It was just the right size!

I quilted this in a hurry, to be done in time for the quilt show.  But I think it came out OK in spite of that. Those not-real-straight straight lines do take some time to quilt!  And then I decided, for something a little out of the ordinary, to have the quilting lines turn the corner in the border.  The quilt crinkled up pretty well and I haven't even washed it yet.

This ended up being a little too big for the space I had in mind, so it doesn't have a home to hang in yet.  I'm still thinking of where to put it so I can enjoy it.

On a personal note, the MRI I had last Wednesday told me that I have a broken ankle!  It's a very difficult-to-see incomplete fracture.  I now am using crutches and have a boot to wear to support the ankle.  I see the Orthopedic doctor next week.  And actually the ankle feels better than it has since the accident.  Some of that is staying off of it, like I'm supposed to, and some it is ?  Maybe healing?  That would be nice!  It will be interesting to hear what the doctor has to say.  I'm not enjoying the crutches, and I'm not really enjoying the forced inactivity either.  I want to go sew!  I keep telling myself to be patient.  Wish me luck with that!  Hee hee!
Posted by Sharon at 5:16 PM