An Update from The Wimpy Gimp

Nothing much to report here.  Still on crutches, still not doing much besides sitting and reading - and still a little whining.  Less whining than there was though, so that is progress! 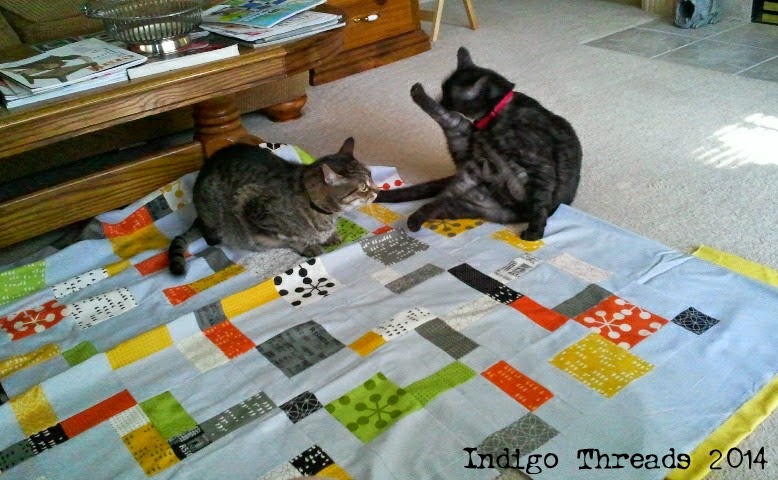 This picture was taken just a day or two before my accident.  I was trying to determine how much border to add to the top.  As you can see, the Quilt Inspectors had to add their two cents.  It's all ready to send to my long-arm quilter and I hope to have it in the mail this week.  She tells me she can have it back to me quickly.  Yay!

Anyone that has spent some time on crutches will agree with me - it's amazing to discover just how much furniture and general stuff gets in the way when you're trying to navigate around the house on those crutches.  It gets pretty tiring.  And crutches aren't very comfortable to use.

If I had been more able to sew when I started this little adventure, I would have made myself some cute quilted padding for the arm and hand areas!  Right now I have washcloths on the arm rests, fastened on with rubber bands.  Just soooo appealing.  And the hand rests started bothering my hands.  These crutches are about 30 years old, and the rubber is less than optimal on the hand rests.  So, I folded up some black fabric and tied it on with ribbon to cushion my hands.  It helps, but my hands are still getting pretty sore.  Those dumb ribbons want to keep slipping off the ends of the fabric and I'm constantly adjusting them.  I can't seem to get them tight enough.  I'm still considering the "remodel" with something cuter - but I'm hoping I won't be on the crutches long enough to make it worth the trouble.  The physical therapists tell me I'm making good progress, so that is encouraging!


I have managed to get up to the quilt studio a few times, trying to work on the 9-patch blocks for the swap with Barb.  It's been slow going.  It's difficult to stand and cut for long, and really hard to move about the studio.  Frankly, most of the time I don't even use the crutches.  It's only a step or two away to get to the cutting table, sewing machine and ironing board.  And I'm being very careful!  I am making progress on the 9-patches, but it's slow.  I'm going to try again today to see what progress I can make.  And I have some things to finish up for the quilt show which is in October that I really MUST get moving on.  Cross your fingers for me!

I'll be going to the quilt shop tomorrow to buy fabric for the 9-patches for the swap.  I was hoping to make a scrappy assortment, but I think I'm going to have to go with only 4 or 6 fabrics and make them production-style, just to get done in time.  I think that will be faster and hopefully easier.

Mary Arnold of Vancouver, WA came and talked to my quilt guild a few months ago.  I was really impressed with her quilts!  I took a bunch of pix and thought I'd share them with you, since I have nothing of my own to share with you. 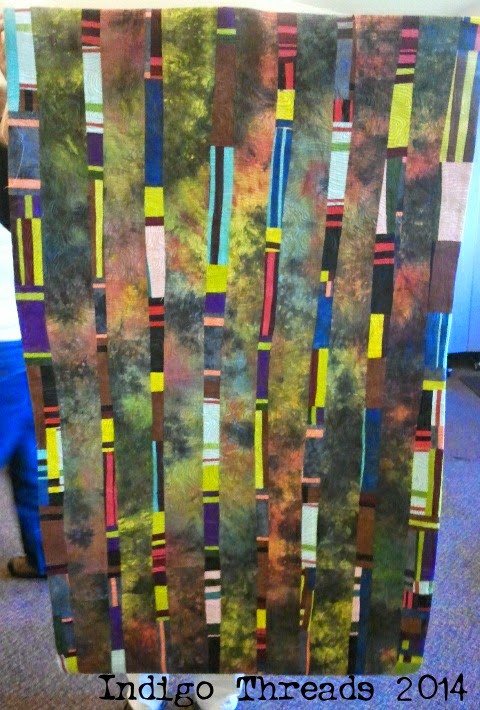 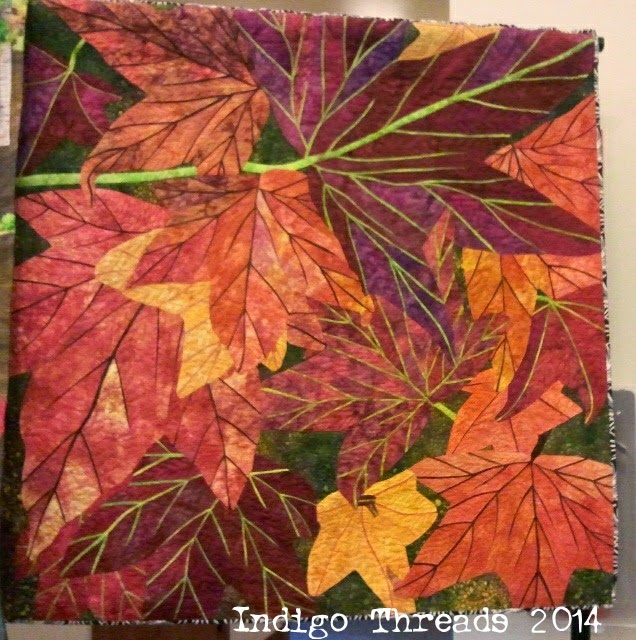 This quilt is a challenge quilt.  The challenge was to include a lime green horizontal line somewhere on the quilt.  I think this one is fantastic! 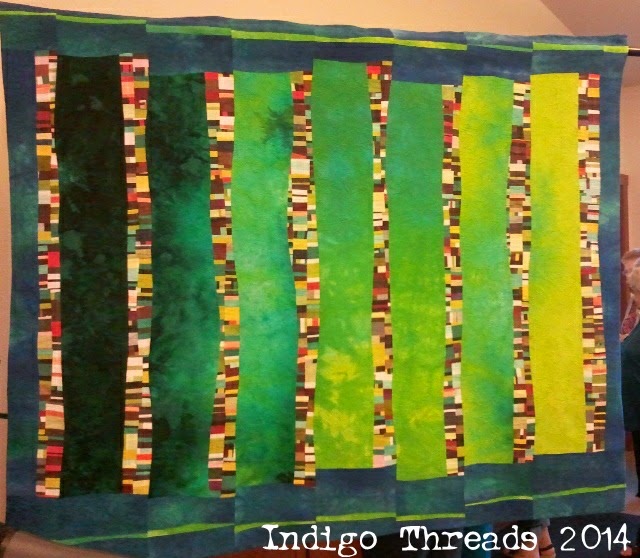 And this quilt is my favorite of Mary Arnold's.  This is a new technique for her. 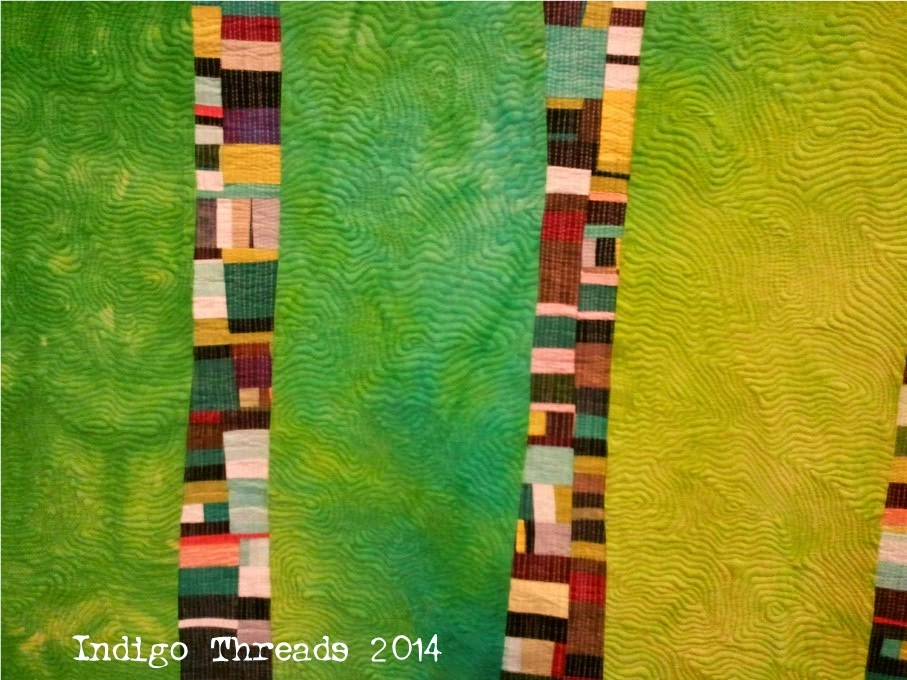 These pieced areas are only about 2 inches wide!  Mary said she sewed a bunch of pieces together, chopped them apart, then re-sewed.  Rinse and repeat to get them really small. 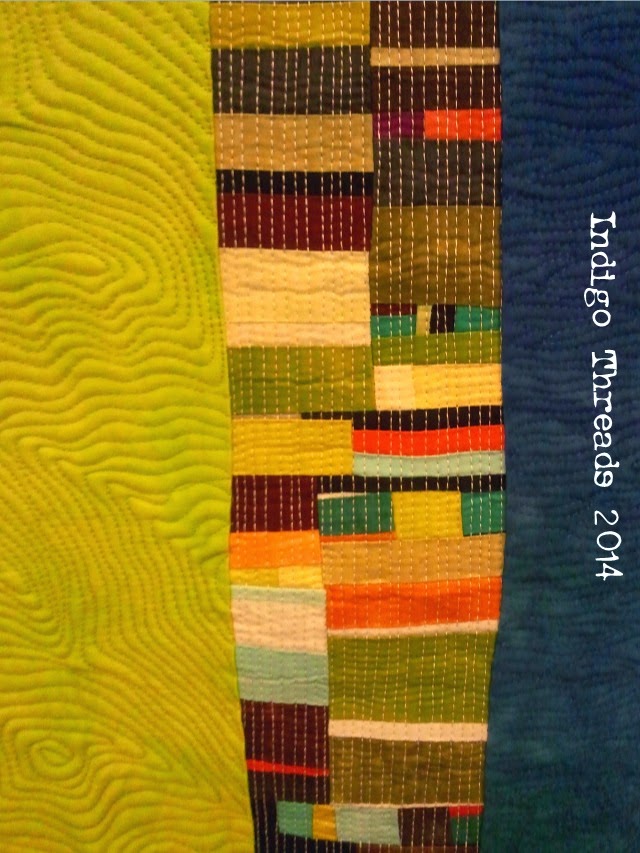 I love this!  What a great way to use up some scraps.  And isn't her quilting awesome?

I hope you have a creative week!
Posted by Sharon at 2:30 PM