But first, some photos from our trip to the Olympic Peninsula last week. 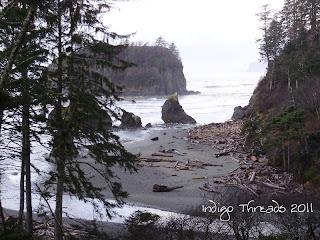 This is Ruby Beach, which is right on the Pacific Ocean.  A very Pacific Northwest-looking beach.  Note the logs all over the beach.  That's pretty common on the beaches up here. Those things are at least the size of telephone poles. 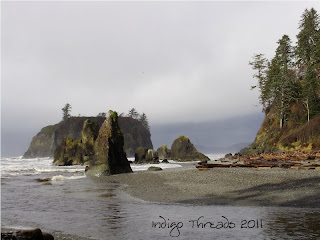 This is another shot of Ruby Beach.  It's beautiful, but it was cold that day!  It snowed the previous night, although there was none on the ground in this area.  I'd never been to the beach in the winter before. 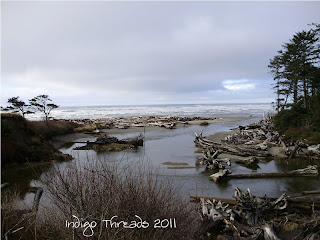 This is Kalaloch Beach, right by the lodge that we stayed in.  A very flat beach, with lots of continuous waves.  There are lots of rocks out there in the water, so I don't think it's ever much of a swimming beach.
What was really amazing to us was that there was NO cell phone service in this area!  We were shocked . . . we never expected that.  30 minutes north or south of Kalaloch had service.  I actually had to use a pay phone, for the first time in a lot of years, to get in touch with my sister whom we were meeting.  And I think it's, I don't know what word fits here, sad maybe, that we've come to expect to be able to use a cell phone, no matter how remote we are.  It wasn't that many years ago we didn't have cell phones and thought nothing of being out of touch.  Times change, I guess.  Or am I just showing my age? *grin*
We were about 30 minutes or so south of Forks, Washington which is the setting for the Twilight series of books and movies.  If you go to Forks, you can get the "Twilight Tour". 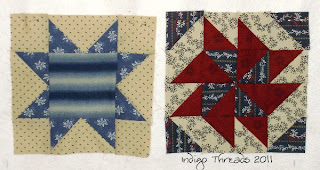 I finally got a start on the Civil War blocks.  I got my new Prussian Blue fabric (see previous post) washed and ready just in time to use it!  And now I'm behind again.  I don't know how long I can keep this up!  But I'm really enjoying the history and the photos on Barbara Brackman's Civil War blog.  If you haven't seen it yet, hop on over and check it out.  There's also a Flickr page where you can see what everyone else's blocks look like.

Here is the project I started using Tonya's new book, as I mentioned in my previous post.  I got all the letters done, following the instructions.  (they were all good, Ton!)  The A didn't come out quite as I had envisioned it, but I used it anyway.  I ended up trimming down the S and the E. . .  they were just too fat.  (Oh, if only losing weight were that easy!)  For a change, I picked out the border fabric first, then based the letter fabrics on that.  DGD's room is painted green and her favorite color is blue, so that was a factor too.  (DGD is 8, and I didn't want to get too wonky.  They are not a "wonky" family.) 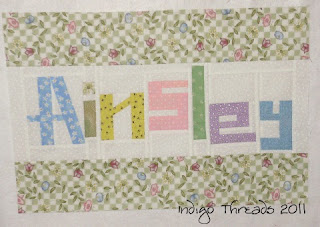 My first thought was not to use spacers between the letters, but then I decided things looked better (easier to read) with the spacers.  For me, the hardest part is always putting the letters together.  It seems so complicated at first.  And I'm never sure how much to make them "dance" up and down.  But I just started sewing two together here and two together there, and before you know it, it's not so bad.  I did have to keep adding more background to the top of the letters.  Too much is better than not enough! 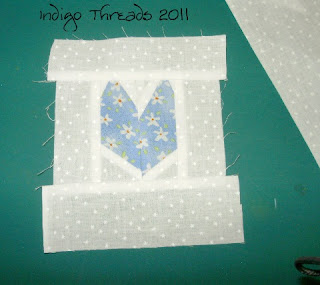 Then I decided that the wall hanging needed a heart on it.  This was my first attempt.  But I didn't like it - too pointy at the top. 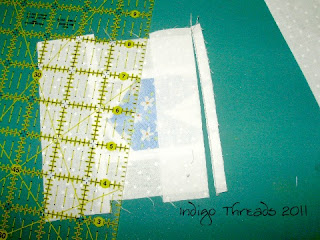 So, I gathered up my courage and trimmed, just like Tonya says.  I figured, what the heck, I had nothing to lose! 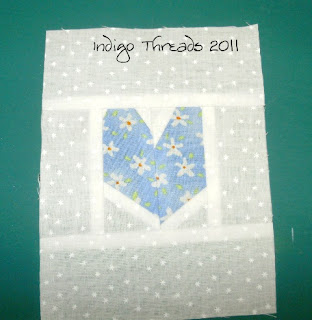 Much better now.  Not perfect, but that wasn't my aim anyway. 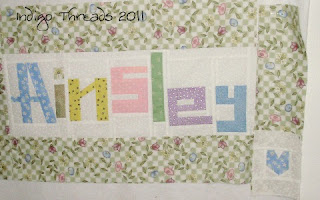 Now, where to put the little wonky heart?  I think this corner is already too busy, don't you? 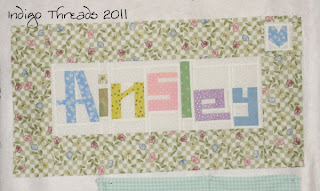 All finished.  Well, first finish, I guess.  I've found something for the back, and I have to go dig in the box of batting scraps for a piece the right size.  I have one week to get it quilted and bound.  This finished at 16 inches tall by 31 inches wide. 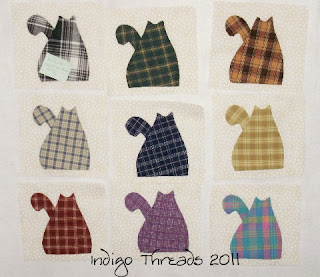 The other night when I couldn't sleep, I was pondering quilt designs, as I often do when I can't sleep.  I remembered these little plaid kitties that I appliqued a few years ago.  At the time, I thought they were cute, but had no idea of what I wanted to with them.  Now I have an idea!  I'm going to add the names of all my cats I've owned to these guys. 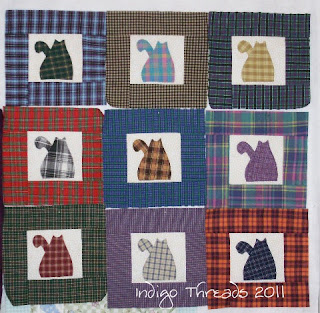 OK, this is Step One.  I've sewn plaid fabric around all the cats.  The blocks are now in the 11 to 12 inch range.  I don't know if they'll stay this size or get cut down some.  It'll come to me.  I'm trusting the universe to tell me what the quilt wants.
I'm not sure how to do this quilt, but I thought I'd just start sewing and see what happens. I'll make parts and pieces and see how they all fit together. Sue at The Magpie's Nest has inspired me to attempt this.  She's been doing a lot of this lately, and it's been fun to watch her process.  I'm having some difficulty in not planning this out. . . . it's hard to let go of that. But if I wait for inspiration (without active particpation on my part), the kitties will continue to languish in a box. I do know I want to continue using the plaids, and I want this to be a useful size, because Lord knows I have wallhangings up the kazoo and very limited wall space. So, that's the parameters I'm starting with. It'll be fun to see where this goes. 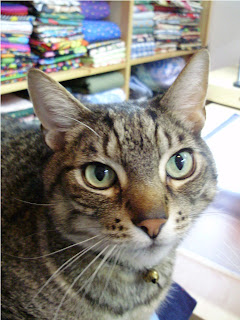 And I just can't sew without my Studio Cat helping me. . . because he won't let me!  Shade's very possesive of his responsibilities in the quilt studio and he won't let Dunkel in to participate, either.   So, I guess that makes everything I do a collaborative effort.  I do the sewing and Shade contributes cat hair and purrs.  Hee hee!
Posted by Sharon at 4:04 PM