Hey!  What happened to August??  Where'd it go?  I was just getting used to summer, and now it's leaving!  I want more August, please.

Seriously, August seems to have just evaporated!  I guess it was a busy month.  Pottery camp went very well, and both boys seemed to have had a good time.  Lots of pottery was made, lots of fish were caught (and released), and plenty of canoe time was had.  No one got homesick and no one got hurt so I'd call that pretty successful.  The only glitch was the last few days of Boy #2, when we had some major septic issues.  But he was a trooper and never complained.  At least I didn't hear him complaining over my complaining.  We finally got things all sorted out and squared away, after 3 days and many $$$.  Did you ever notice that plumbers are hard to find over the weekend?  And how come the septic only has issues on the weekend?  Sure made me miss city sewer systems!  Oh well, I guess it's the price we pay to enjoy the country life.

After that, the rest of the month is kind of a blur.  I really don't remember anything much.  I was having some allergy issues, and just trying to get caught up after pottery camp and the septic issues (lots of laundry).  And, to add insult, yesterday, Aug 31st, our high temperature was 58* F and it rained all day.  A little foretaste of what's to come.  I swear, some of the trees are starting to turn, the flowers are all on their last legs, and it's starting to feel a little "autumn-y".  I'm not ready!

Not a lot of sewing has been occuring here, what with all the other stuff going on.  Plus, I was kind of "sewn out" after the two challenge quilts.  And, I've been working on some secret projects, so I can't show you much of what has been happening in the studio.  So, the last two days, my brain has seemed to kick in (finally) and I had some ideas.  So, I made up some sample blocks to test my ideas. 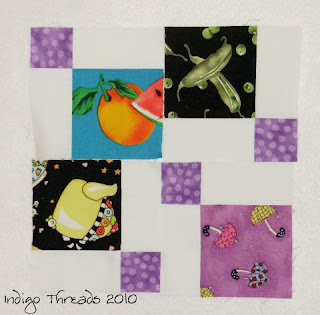 Here is my first block for an I Spy quilt for my DGD #2.  I'm way over-due on making her one of these.  Big Sister got hers when she was two, and DGD #2 is 5 now and starting kindergarten.  So, I finally got started on it.  It's a Disappearing 9-Patch, and this is the configuration I'm thinking of using.  The white fabric and the purple dots fabric will be consistent throughout the quilt - the purple matches her bedroom.  I've now cut way more I Spy blocks than I need for the quilt, so I'll have to thin the herd a bit as I sew.  I learned on my first I Spy quilt to not have all the squares going in the same direction (Thanks, Katie!).  It makes the quilt more interesting, and easier to put together, which is the big factor for me.  Especially with this block! 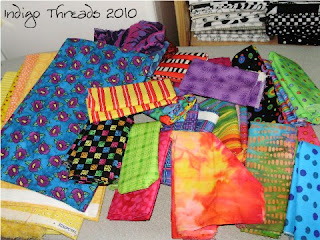 I'm going to be participating in a block exchange with my friends from California, including Purple Pam and Roberta.  We'll be using brights.  Here's just a sample of what I've picked out.  Think they're bright enough??  This one is gonna be fun!  (And why won't this picture go in the center like the other ones??) 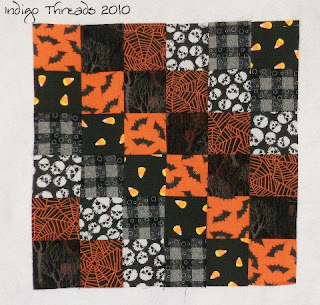 And lastly, this increasingly fall-like weather is making me think of Halloween.  I love Halloween, and seeing a pile of cute Halloween fabrics over at Tonya's blog got my brain engaged.  I love Bonnie's free patterns at Quiltville and Scrappy Trips is one of my favorites.  I've made two of them already.  So, I got to thinking. what if I used 3 inch cut strips instead of 2 1/2 inch?  That would make a bigger block, which would make it even faster to make a quilt.  And it would show off some of the bigger Halloween prints better too.  So, I had to test it out.
Yep, it works!  Of course, my brain wasn't totally with me on the first block.  I cut everything at 3 1/2 inches instead of 3 inches.  Rats! --- Do over!  The 2nd time was much better.  I used up some really crummy fabrics to test, so no biggie that it didn't work the first time.  This makes a 15 inch finished block, so I only need 20 blocks instead of 35 or so.  This would also work for the Scrappy Bargello, which is calling to me lately.  Who knows. . . I might get so excited that I'll cut for both quilts!  That would make a pretty good dent in my Halloween fabrics.
So, I guess I'm getting excited about sewing again.  Now I just need to get in the studio and start cutting and sewing.  Let the fabric fly!
Posted by Sharon at 5:43 PM