All done! Yay! I got the borders finished on this uneven 9-Patch from the last post. I was inspired by Gwen Marston's chunky applique from "Collaborative Quilting". I thought that the dotty wavy "vine" really makes this a fun, happy quilt. 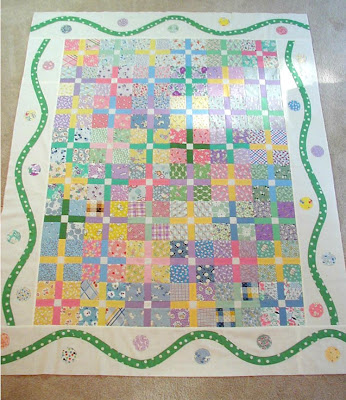 The applique was pretty easy to do, and I don't do much applique! And I think the dots add just the touch of whimsy that I was looking for! I had a hard time not putting too much on - I kept telling myself to leave room for the quilting. 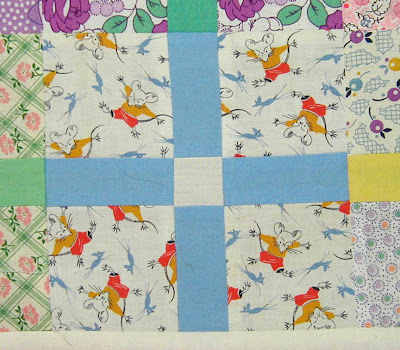 This block has real, old fabric in it. I think it's from the 1920's. I love those frantic mice. They're very angular and spiky. And I have a closeup of two of the dots that use real 30's fabrics. The first one was from an old apron, and the second one is/was a feedsack. Most of this quilt is reproduction fabrics, with just a few old fabrics thrown in. 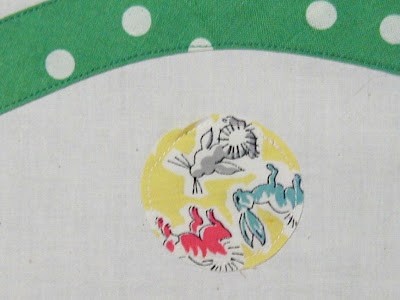 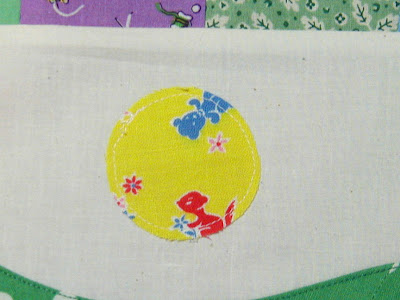 As I was finishing this quilt, I remembered that I have another 1930's quilt that needs to be finished. So I pulled it out and looked at it. I had been stuck on whether or not it needed a border. I decided to put a small border on it. This quilt has all old fabrics, aside from the solid blue (that one is new). I decided, because these are old fabrics and kind of fragile, that a border would help protect them better than having them right on the edge of the quilt. 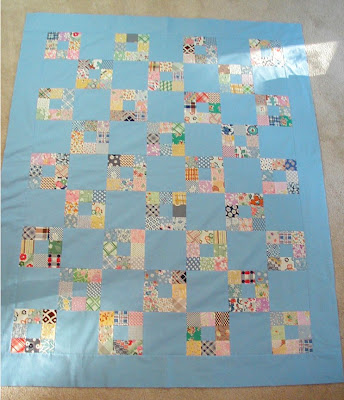 This quilt has kind of a story with it. When I worked on the charity quilts committee of my quilt guild in California, we got lots of donations of fabrics. One of these donations was a paper grocery bag mostly full of old fabrics. No one on the committee wanted to deal with them - they were going to throw them away! So, I volunteered to take them. I was stunned when I got home and started going through the bag. I realized these were someone's scrap bag with real fabrics from the 30's and 40's! On the very bottom of the bag was a feedsack that hadn't seen the light of day in many, many years! It was in pristine condition! (see the second dot up above - that's the feedsack). Also in the bag were fabrics from the 1950's and 60's. (I haven't dealt with them yet other than to wash them- they're patiently waiting their turn.)
I gently hand-washed everything because it was kinda smelly, put them on towels on the floor to dry, and they came out great. The scraps and towels totally covered the living room and family room floors, and I think DH thought I had lost my mind! *grin* I've made two little quilts with the smallest pieces of the 30's fabrics (which I will show you another time), and then I used the largest pieces for this one. I still had to do some piecing to have enough for these squares, which finish at 2 inches. (6 inch finished blocks) 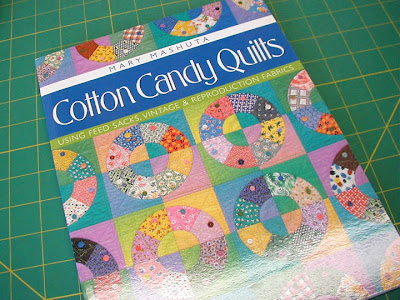 My inspiration for this quilt came from this book by Mary Mashuta. This one is chock-ful of pictures of old quilts. 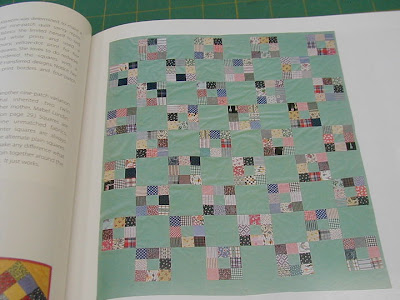 This is the picture that inspired me. 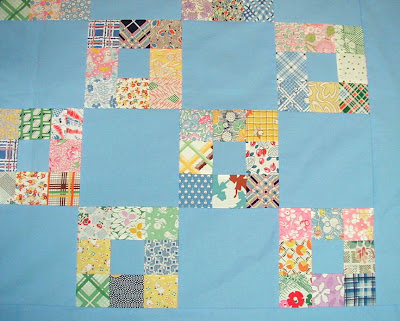 Here's a closeup of one corner. Following are some of the blocks. Can you see where I had to piece some of these squares? 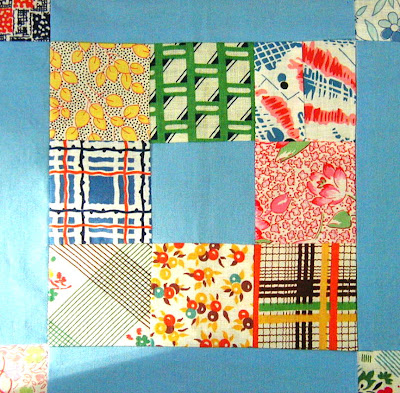 What really amazed me about this collection of fabrics was how many plaid fabrics there were! I guess this lady really liked plaid, which is great because I do too! You hardly ever see a plaid or a graphic fabric in the 30's reproductions, and they complement the little flower prints so well that you'd think at least some would be included. Also, this lady had a lot of orange-y fabrics. That's not my favorite color, but yet these all work together so well. This is a great pattern for getting everything to "play nice". 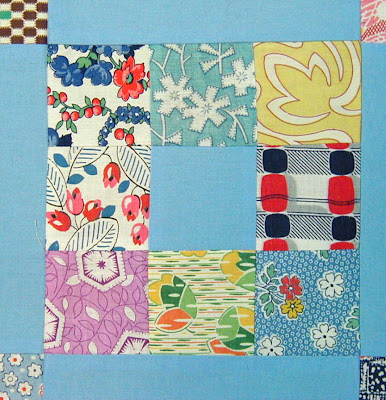 I think some of these fabrics are from the 1940's as well, because they have more intense color to them, and larger prints. But I'm just guessing on this. 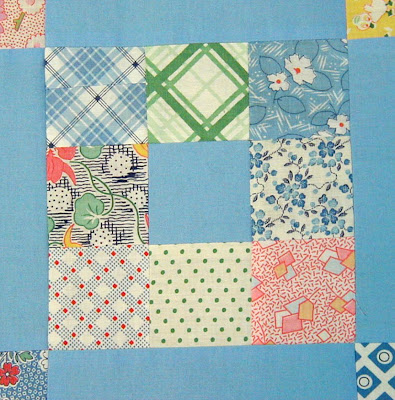 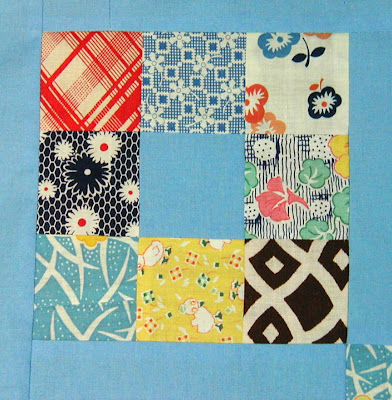 Aren't those cool fabrics?? I really haven't been too "into" the 30's reproductions. I'm not a pastel person, and I'm not quite old enough to have them be contemporary to me. But I love history, and I love seeing the real thing!
We've been having bees in the kitchen for a week or more now. DH keeps killing them, and more keep showing up. I don't want to know why. There may be a nest in the skylight in the kitchen. Ewww! At least they're not aggressive. I can ignore them if they leave me alone. If this keeps up much longer, I may have to call an exterminator. Ugh.
Well, it was a good thing I posted about the nanny geese when I did. A day or two after I posted, a whole big blizzard of Canada geese came flying into the lake in the morning, honking and carrying on. They flew out that evening. I think "our" geese left with them. We haven't seen them since. So, their job was done, I guess. They must be going south for the winter.
Sara over at Sara's Scraps has posted about her experience at Gwen Marston's Beaver Island Quilt Retreat. She's got lots of pictures of Gwen's quilts from Gwen's new book Ideas and Inspirations, Abstract Quilts in Solids.
I found an interview with Joss Whedon, Eliza Dushku and Tahmah Penikett about the new show "Dollhouse". There's also a trailer available to watch. "Dollhouse" premieres in January 2009 on Fox TV. I'm looking forward to it. There doesn't seem to be much good on this fall. I had to tape "Sarah Connor Chronicles" to watch later, because DH isn't available to watch it right now. I also taped "Fringe" tonight. Anybody else seen it? What do you think of it? I'm dubious. I don't want to get involved in another "Lost"-type show, and it's by the same creator. We're not real big on the TV anyway. Much rather sew (or do pottery, for some of us) or read!
Speaking of that, time to head for the quilt studio!
Posted by Sharon at 9:15 PM